Scarface’s son Brandon Jordan, a 20 year-old who has autism, has been missing since Wednesday January 29, according to Los Angeles’ KABC. A search is underway for Jordan, who was last seen when he left his home in Leimert Park.

“He just got agitated, didn’t want to talk about it no more, and just stormed out of the house with nothing,” Jordan’s mother, Melissa Lollis, said. At the time of his departure, Jordan was wearing a black hooded sweatshirt, gray pants and black sandals, the news station reports.

Missing person fliers about Jordan’s disappearance have been posted throughout the family’s neighborhood and at West Los Angeles College, which Jordan attends.

Lollis describes her son as a “high functioning” person with autism, according to KABC. She says he is not likely to interact with people he does not know, but says circumstances may impact this.

“He wouldn’t go up to nobody,” Lollus said. “But now, in a desperate need without his wallet and not having his cellphone, he might reach out and ask somebody for money. I don’t know.”

Anyone with information regarding Jordan’s whereabouts is being asked to contact police.

Scarface has not addressed this matter publicly.

Jordan’s Missing Person flier can be found below, via AutismSpeaks.org. 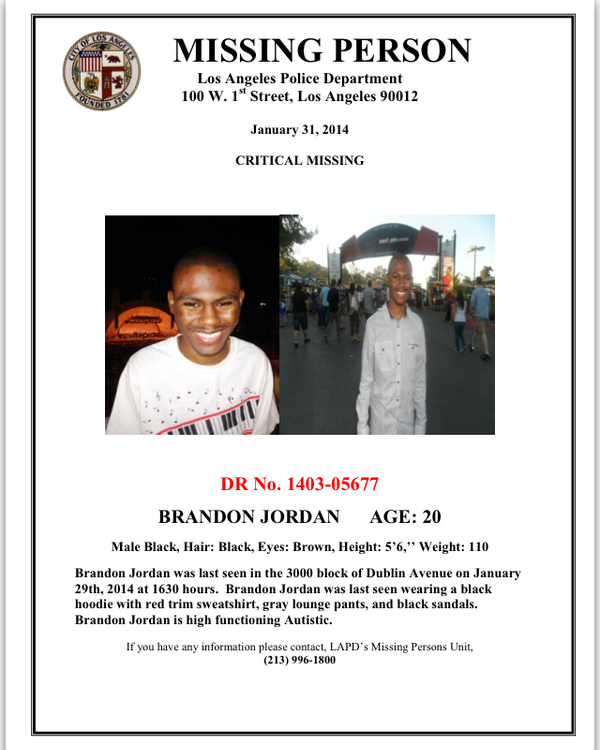 UPDATE: Scarface’s son has reportedly been found in good condition, according to KABC. Authorities have not announced where Jordan was found and no further information was made available.

RELATED: Scarface Says Hip Hop Is Intentionally Being Dumbed Down