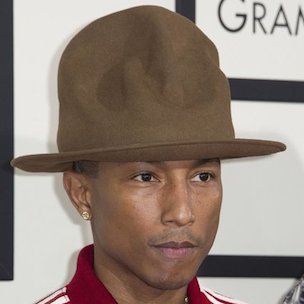 Pharrell’s hat was a trending topic on Twitter and other social networks on Grammy night (January 25). The producer-rapper-singer recently spoke about why the attention his hat garnered was unexpected.

“I was just wearing a hat,” Pharrell said in an interview with Los Angeles radio station Power 106. “You just never know those things.

“I rest good knowing it’s just me expressing myself,” he continued, speaking of the hat that he says was made by Vivienne Westwood “as an ode to” Malcolm Mclaren. “I just don’t understand people who live in a box and are really comfortable saying, ‘Me too.’ It’s so weird to me.”

The topic of “me too” was a focal point of “Mr. Me Too,” a Clipse track released in 2006, which Pharrell and Chad Hugo produced as The Neptunes. During this interview with Power 106, Pharrell spoke about his relationship with Chad Hugo and how it has progressed over the years.

“Chad is working,” Pharrell said. “We’ve both been super busy…He’s gettin’ it. He’s workin’ on a bunch of projects and we’ll be doing a couple of them together as well. He needed to spend more time around his family, his son and his daughter and I understood that, but he’s still gettin’ it in…Chad is a genius.”