Snow Tha Product has announced her F#*K Your Plans, Come Kick It Tour, which is slated to begin next month.

The tour is scheduled to start in Austin, Texas February 26. The nation-wide tour is slated to conclude in Dallas, Texas April 12.

In July 2013, the Mexican-American Snow spoke with HipHopDX about her work in Rap as a Latina.

“People forget that Latinos have been in this Rap thing since the beginning,” Snow said at the time. “Kid Frost is an OG as far as Latinos in Hip Hop go. I love B-Real in Cypress Hill and Cuban Link is dope. Mellow Man Ace spoke Spanish on a track and made it work. We have our own thing going, but Latinos make it relatable to everyone, and it doesn’t exclude anyone. I honestly listened to Big Pun the most, but obviously South Park Mexican repped hard for Mexicans. Latin folks have been involved in Hip Hop since the start, so I don’t understand why people get so shocked that some Mexican chick is really goin’ hard in it. Sometimes they are like, ‘Who is this girl? What is she reppin’?’ We have the same struggles. I’m just bringing a different perspective to it. I think it’s awesome ‘cause you got people like Pitbull that are doin’ it big. Going Mr. Worldwide and shit. It’s cool to see that as far as Pop music goes, people can’t forget he was really spittin’ hard on his earlier stuff.”

Tour dates for F#*K Your Plans, Come Kick It Tour can be found below. 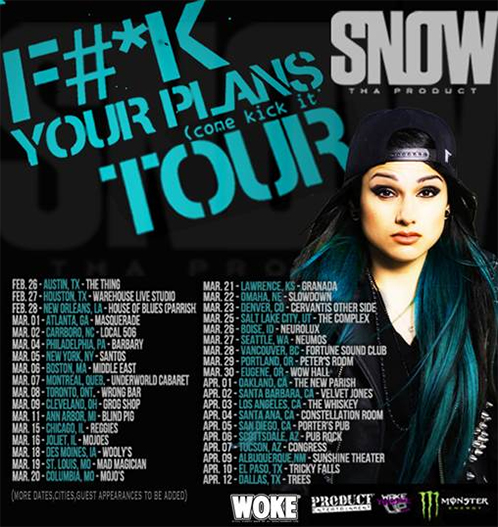