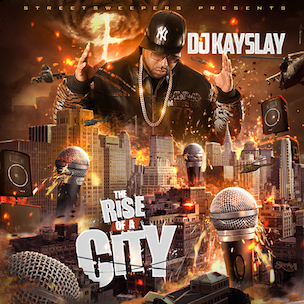 DJ Kayslay released his The Rise of a City mixtape yesterday (January 23). It features guest appearances from 50 Cent, Fat Joe, 2 Chainz, Game and others.

Last week, DJ Kayslay released “90’s Flow” featuring Fat Joe, Ghostface Killah, Raekwon, Sheek Louch, McGruff, N.O.R.E., Lil Fame, Prodigy, and Rell. The track is featured on The Rise of a City and is to be featured on his forthcoming Rhyme or Die album.

The Rise of a City is available for download at datpiff.com.

DJ Kayslay’s The Rise of a City cover art, tracklist and mixtape stream are as follows:

6. “No Sympathy” f. Nore, Saigon, and Torch(Produced by Street Runner)

10. “Rolling stone” f. The Game, Young Buck, and Papoose (Produced by The Mekanics)