Eminem is set to launch a Battle Rap reality TV show, according to Jack Thriller.

According to Thriller, who is set to host UW Battle League’s upcoming “High Stakes” event, Eminem asked him to host the new TV series. Thriller made the announcement on his Instagram page. The caption for Thriller’s photograph featuring Eminem can be found below.

Shoutout to my big brother SLIM SHADY for hitting me up last night and making me the new host of his battle rap reality show JACKTHRILLER.COM WORDS CANT EXPLAIN THE JOY IN MY HEART @uwbattleleague@unclevinrock #doglife #thrillergang #superstarshit

There is no official word yet regarding Eminem’s involvement with the TV show. Eminem was known for battling rappers before he was signed by Aftermath/Interscope. There is also no official word regarding the Battle Rap stars or leagues set to be involved in the show. Thriller’s Instagram post can be found below. 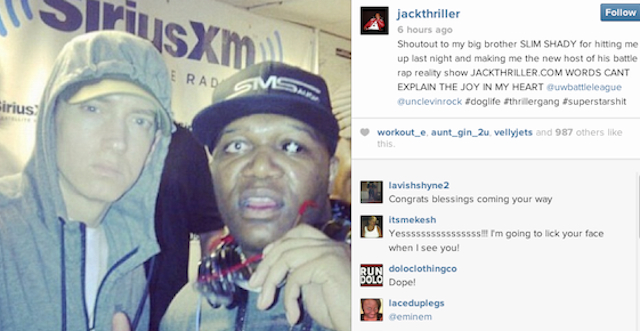