In addition to serving as the cover artist for the annual issue, Macklemore was also interviewed by The Source in an exclusive interview. While speaking with the magazine, The Heist rapper addressed the skeptics, the success of “Thrift Shop,” and the upcoming Grammy Awards.

Macklemore revealed that if The Heist does win Best Rap Album at the Grammys later this month, Hip Hop will be “heated.”

“Then he’s got a point. [In the Best Rap Album category], we’re up against Kendrick, who made a phenomenal album. If we win a Grammy for Best Rap Album, hip-hop is going to be heated,” Macklemore said.

“In terms of [that category], I think it should go to Kendrick,” he said. “He’s family. TDE is family, and I understand why Hip-Hop would feel like Kendrick got robbed [if he didn’t win]. I’m not trying to compare albums; I think you can make an argument for both. With that being said, I am a huge supporter of what Kendrick does. And because of that, I would love to win in a different category. We obviously had massive success on commercial radio, and I think that, in ways, The Heist was a bigger album, but Kendrick has a better rap album.”

Other artists whose albums were nominated for Best Rap Album include Drake, Jay Z, and Kanye West.

Kanye recently criticized the annual awards show and revealed that he’s never won a Grammy against a white artist during a rant at his “Yeezus Tour” stop in Phoenix, Arizona last month.

“Now I’m 36-years-old and I have 21 Grammys,” Ye said. “That’s the most Grammys of any 36-year-old. Out of all those 21 Grammys, I’ve never won a Grammy against a white artist…People come to me and they congratulate me on those two nominations. Fuck those nominations.”

The Source’s Man of the Year issue is currently available on newsstands. The cover for their January issue can be found below (via MTV). 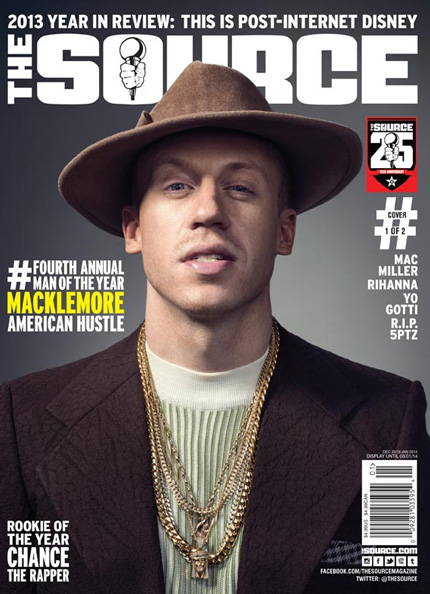