Rappers reference an array of brands from Gucci to BMW in various raps. To coincide with Jay Z’s cover story, Vanity Fair created a list of Jigga’s “Most Name-Dropped Brands” listed by album.

Vanity Fair had criteria they used.

“To make the task realistic, we referenced only albums officially included in his discography, and at times we interpreted lyrics when they very obviously referenced a brand without outright saying it,” Vanity Fair wrote on its site.

According to Vanity Fair, Jay’s most referenced brand is Mercedez Benz. Lexus, Maybach, BMW, Range Rover and Porsche were also part of the list the magazine created.

Jay also often references guns in his raps, with Glock and Kel-Tec being part of this list.

Another brand that Jay Z has referenced extensively is Cristal, the luxury champagne brand. Cristal was once at least one of Jay Z’s favorite beverages. However, he has also referred to Cristal as racist in different verses since 2006, when the champagne company reportedly attempted to distance itself from Hip Hop.

The chart is missing Jay Z’s 2001 release, The Blueprint.

More of Vanity Fair’s chart can be viewed below. 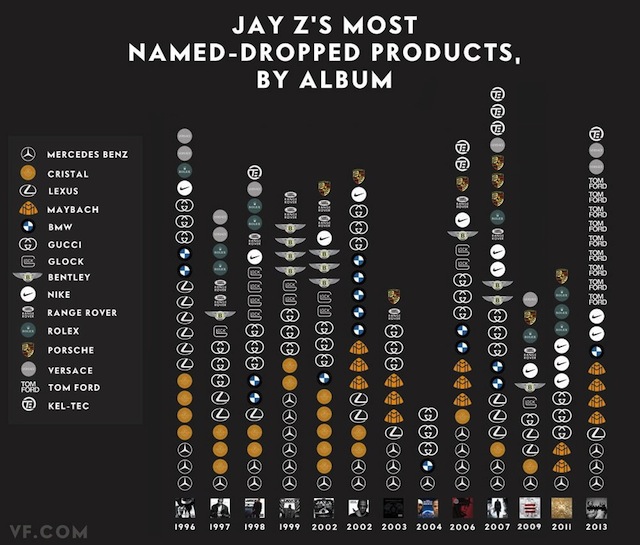