“I wanted to work with real people and not people who are just doing it for political reasons or whatever,” she said. “It was just people who were interested in working with me. Tech N9ne is obviously one of the dopest emcees ever, and was willing to be on my mixtape, which is crazy. It’s really cool ‘cause I haven’t worked with many artists.”

Snow Tha Product and Tech N9ne did a collaborative interview during the Los Angeles stop of Rock The Bells 2013.

Snow Tha Product explained the concept of the song and the video for “Hola” during her exclusive interview with HipHopDX in July.

“It’s a little bit of a play on a video by Gloria Trevi,” Snow Tha Product said. “She’s a Mexican Rock singer, and I looked up to her a lot. She’s really bad-ass. I wanted to do something similar. Her version is a lot more sexual than mine, which is more party. But yeah, she definitely had a cool video, and I wanted to do my version of it. I came up with the song just after a good party night. I was like, ‘Bam. I’m gonna tell the story of what happened last night.’”

The Good Nights & Bad Mornings 2: The Hangover cover art and mixtape countdown are as follows: 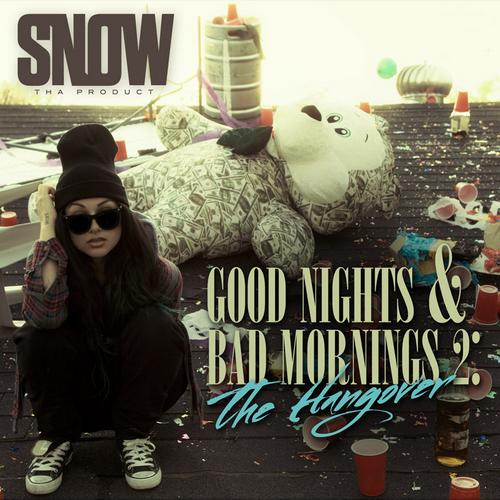 The project’s tracklisting is as follows:

9. “Hold You Down” f. Cyhi The Prynce (Produced by Sunny)

13. “Business Is” (Produced by Arthur McArthur)