Kendrick Lamar Says He Has Not Recorded In Studio With Eminem

Although Kendrick Lamar and Eminem were photographed together in June, Lamar recently revealed that he has not recorded in a studio with the artist sometimes known as Slim Shady.

“I wish,” Lamar said in an interview with Los Angeles radio station Power 106. “We haven’t really gotten a chance to build in the studio like that. I basically just met him for a second. But if I get that call, I’m definitely running.”

Two photographs emerged from their meeting. One featured Eminem and Kendrick Lamar side by side. The other photograph featured several artists including ScHoolboy Q, Ab-Soul, Jay Rock and Royce Da 5’9. That image can be viewed below. 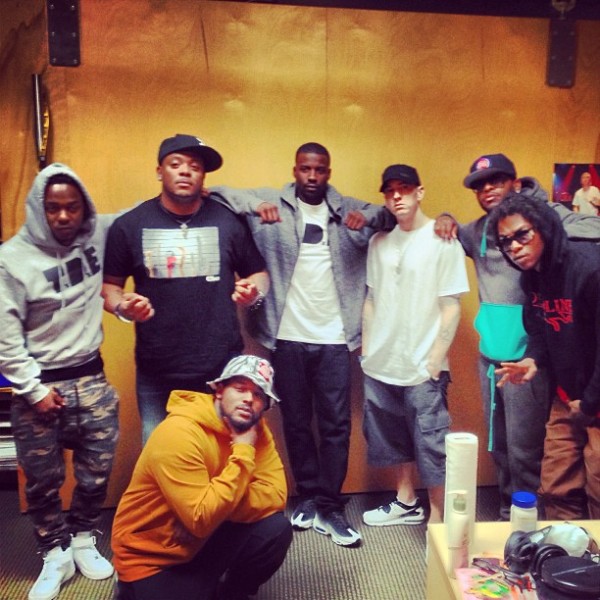 In June, Kendrick also discussed the advice he has received from Eminem.

“Always stay true to the craft, really,” Lamar said of Em’s advice. “Everybody knows Eminem’s penmanship is insane, so I think, for the most part, he focused on that as much as possible. That was the game that he was giving me and my crew. Always stay focused on the craft and not indulge in all the other crazy stuff that comes around.”

Lamar also said he was honored to be referenced on Eminem’s new single, “Berzerk.”

“That’s the ultimate feeling,” Lamar said. “At the end of the day, I trace back to when I first wrote my first raps. I was 13. So, studying these cats and actually to be privileged and recognized for my work, it just shows that if I continue to do my best with what I’m doing, it could take me to the next level. Them actually acknowledging me, that’s the first steps of it.”