Drake’s father will be featured on his upcoming album, Nothing Was the Same.

“My dad is a star,” Drake said in an interview with XXL, as reported by MissInfo. “That’s what you have to understand. I can call my dad right now and be like, ‘Yo, dad, I need you to fly to shoot.’ He’s always down. I’m living my dad’s dream. My dad wanted to be a famous singer. I have my dad on another bonus record on the album called ‘Heat Of The Moment.’ It’s a real relationship. Not to be ironic, we go through the motions of a father-son relationship. Right now, he happens to be extremely stable and content, and I take care of what I can for him. All he wants to do is go to Beale Street in Memphis and play music. He’s rediscovered his passion for music and for being a musician.”

While their relationship appears to be positive at the moment, Drake addressed “dark times” in their past.

“Like any other family, there have been dark times,” Drake said. “There have been other interviews where I was asked about my dad and I didn’t want to talk about it. And there were records where I didn’t paint my dad as the greatest guy. At the end of the day, my dad knows I love him and that he’s a great friend of mine, but as far as being a father goes, I look forward to being a better father for the children that I have. But at the end of the day, he is a great man and I love him very much.”

His love for his father has not stopped Drake from wondering what life would be like if his relationship with his father would have been different while growing up. Drake was asked if he wonders if he would have the same “drive to succeed” if his “dad was around.”

“One hundred percent,” Drake said. “If my mom was in good health, if my dad was a solid father with a business that I saw as a shining light and I wanted to be under him. I regret nothing. I wouldn’t change a thing. As painful as some days have been, as exhaustive and draining some days have been, as it looms over me with my mom being sick, with 40 having MS, I’m always scared like, “What would you do?”

Drake’s Nothing Was the Same is set to be released September 24. The album is reportedly slated to feature Jay Z, A$AP Rocky, Justin Timberlake, Frank Ocean, Future, Lil Wayne and Birdman. Nothing Was the Same is also reportedly scheduled to include production from 40, Boi-1da, Mike Zombie, T-Minus, Swizz Beatz, Timbaland, Clams Casino and James Blake. Reports of the features and producers came from a photograph Drake’s father released in May 2013, an image which has since been removed from his Instagram account. That photograph, which appears to include the tracklist for Nothing Was the Same, can be seen below. Drake has not confirmed a final tracklist for the project. 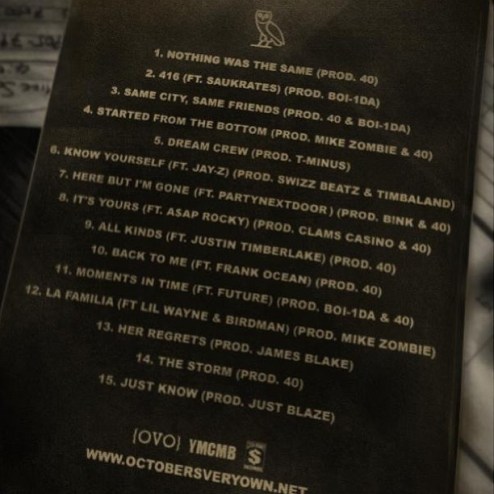 RELATED: Drake “Nothing Was The Same” Release Date & Cover Art