HoodLove, LLC has sued Jay Z’s ROC Apparel Group over a shirt that features the words “Hood Love” on it, according to TMZ.

The for-profit company filed a lawsuit this month over a shirt design in the Rocawear line. The shirt, which can be seen below, also features Jay Z’s lyrics, “I’m biggin’ up my borough” from The Black Album’s “What More Can I Say?”

HoodLove says they have owned the “HoodLove” trademark since 2006, according to TMZ. The company has been working within poverty-stricken communities, according to its site.

“The word HoodLove represents a commitment to the social and economic recovery of the poverty stricken communities commonly known as ‘the hood,'” HoodLove’s site says. “No matter who you are or where you are. When a movement is created through innovation and dedication, the possibilities are endless.

“The success of HoodLove in the social and economic recovery of the hood will require the participation and dedication of the residents of the hood to positive commitments that will be good for the hood,” the site continues. “Do what you can to make the hood a better place to live. If you love the hood, or want to know more about the hood, this is the place for you.”

HoodLove is now suing for profits from the shirt and the company wants the shirt in question to be pulled from retail stores.

A photograph of the shirt, provided by TheStyleCure, can be seen below. 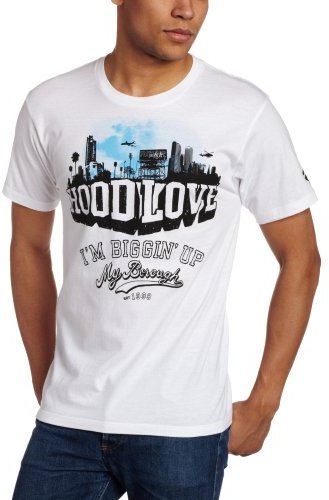 Rocawear was started by Jay Z and Damon “Dame” Dash in 1999, following success with Roc-a-Fella Records. However, they faced some financial hardships in January 2012, when Rocawear laid off half of the staff of its men’s and boy’s apparel division. In June 2013, Rocawear was sued for not paying its bills, according to a story written in the New York Post.