Just when it appeared that the feud between crooners Frank Ocean and Chris Brown had begun to simmer, the beef between the pair has been reawakened thanks to the release of the lyric sheet to Ocean’s upcoming record, “Versace.”

The Channel Orange singer doesn’t call out Brown by name on “Versace,” but he does refer to this year’s Grammy incident in which Brown did not stand up (although he did applaud) when Ocean was awarded the Grammy for Best Urban Contemporary Album, a category Brown also received a nomination for.

Ocean also makes mention to the Fortune songster’s music being “sloppy” in the soon-to-be controversial lyric.

“You could stay seated I’m taking that Grammy/Your music is sloppy/Niggas is heated they keep on repeating the evening in slow mo,” read the “Versace” lyric, which was made public via a Tumblr post.

Following a parking lot brawl between Ocean and Brown at the top of the year, the feud between the two singers has had its fair share of ups and downs. In March, Brown stated that he had “respect” for Ocean’s music, but just a few months later news spread that the Virginia crooner could possibly be charged in the January brawl.

Ocean joins a handful of artists Brown has feuded with over the past few years. Among those artists is Young Money singer/rapper Drake who was involved in last year’s notorious fight between Brown’s camp and his own at W.i.P. nightclub in New York City.

The lyric sheet to “Versace” can be found below. 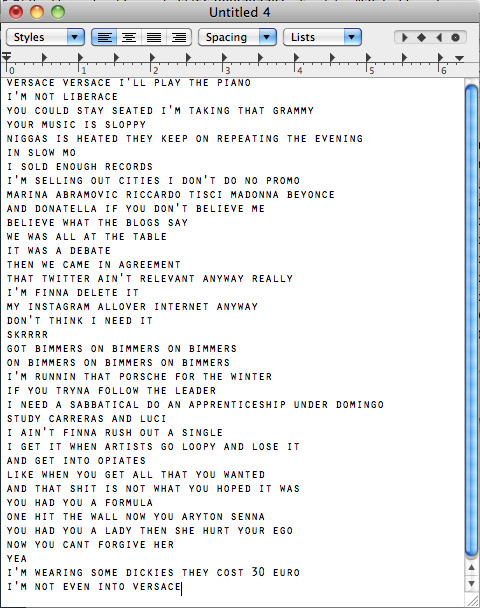 RELATED: Frank Ocean Says He Will Not Press Charges Against Chris Brown