Earl Sweatshirt has restated his stance on Jay-Z’s Magna Carta Holy Grail. In a recent interview, Sweatshirt explained that he loves Jay-Z but does not like Jay’s latest. He also went into how fans “wanna beat” him up for his opinion.

“There’s a whole bunch of niggas that wanna beat me up,” Earl told Fader. “I love Jay-Z, that’s why I didn’t like his album so much. I listened to the shit, and then I listened to something else, and I was like ‘I don’t like this.’ And then I said that, and then everyone got really fucking mad. A lot of niggas was like, ‘Bro, you have not done enough in your career to be having an opinion’. I would love to get punched over not liking an album.”

Earl Sweatshirt’s interview can be viewed below.

The opinion he had was a negative one, which he explained to Twitter followers once Magna Carta Holy Grail was released. The tweets containing his opinion of the album follow.

im gonna listen to allure and eat a breakfast burrito.

lol my bad ill try not to have opinions any more

The opinion opened up a debate on Earl’s timeline, with fans reacting to the statements. Sweatshirt ReTweeted several fan reactions.

A trash rapper trying to get attention “@GawdNamedPete: Who is @earlxsweat?”

Shut the entire fuck up. Your hype over. “@earlxsweat: if you really fucked with magna carta then unfollow me”

Jay has had favorable things to say about Odd Future.

“[Odd Future has an] aversion to corporate America,” he once shared in an interview. “People have a real aversion to what people in power did to the country. So they’re just lashing out, like: ‘This is the son that you made. Look at your son. Look at what you’ve done.’”

This weekend, Odd Future’s Tyler, The Creator posted an image on Instagram with Jay-Z after his New York date for his Legends of the Summer Tour with Justin Timberlake. That image can be viewed below. 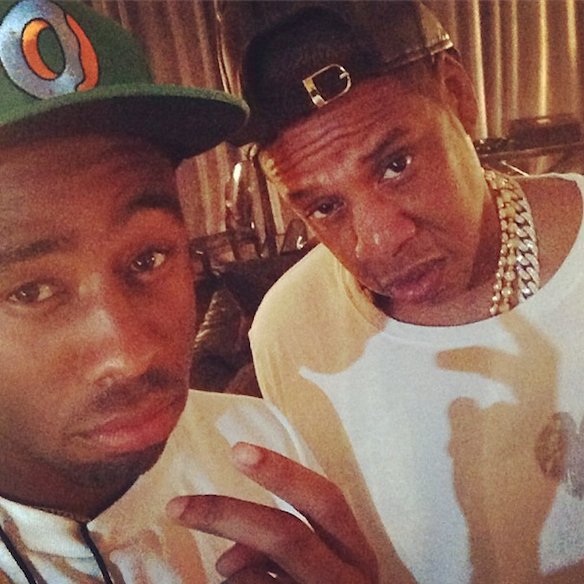