According to XXLMag.com, former Bad Boy Records artist Loon, who now goes by the name Amir Junaid Muhadith, has been sentenced to 14 years in prison due to drug trafficking charges he received several years ago in North Carolina.

Loon has remained relatively silent following his arrest in Belgium, a country he attempted to flee to in 2011 and is now imprisoned, and with the conclusion of his trial the former emcee is now sharing his side of the story.

In a recording made from prison, Loon first went on to speak in detail on the charges he received and specifically explained the nature of his conspiracy charge.

“I also want to explain to you in detail, the detail of the charges I was charged with and the federal indictment from the Eastern District of North Carolina which was the conspiracy charge, which I was charged with,” said Loon. “Conspiring to possess with intent to distribute…If someone was to call you on the phone and make statements engaging in some form of illegal act, the moment that you answer that persons question or answer that person in general, automatically that falls underneath the umbrella of conspiracy. That means at that point you are conspiring to join that individual…to do something illegal.”

Later in the audio recording, Loon referred to the individuals who went on to “implement” him following their own arrests and states that there was no real affiliation with the persons he says merely crossed his path at one point.

“In my case, back in 2008, before Islam, I was affiliated—not even affiliated, I don’t want to say that, but some individuals had crossed my path who were interested at one point in the music business,” he explained. “At some point these individuals called me in regards to something that was totally away from the lifestyle and life I was living. The fact that I responded to these individuals placed me underneath the umbrella of conspiracy and therefore once these individuals were apprehended by the United States government they chose to implement me in the situation.”

The full audio recording as well as Loon’s indictment can be found below. 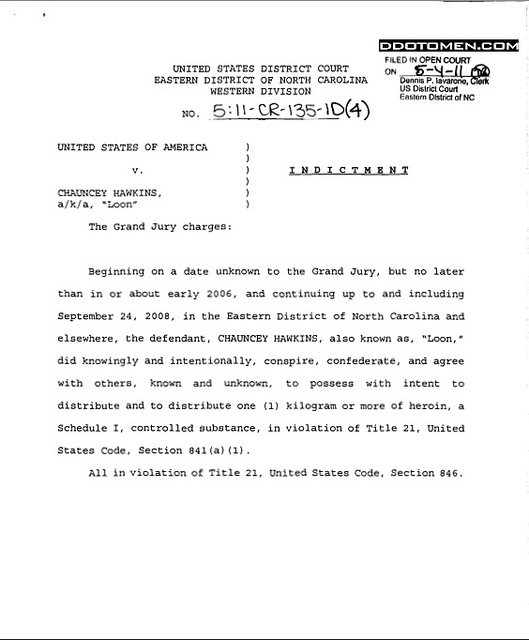