Big Sean Unsure Where Eminem Collaboration Will End Up According to Big Sean, his new album Hall of Fame impressed Eminem. In a recent interview with The Breakfast Club, the Detroit emcee shared Eminem’s words of advice before admitting that he does not know where their collaboration will end up.

“I ended up playing my whole album, front-to-back, straight through, and [Eminem] said, ‘I haven’t been this impressed in so long with someone’s album. I knew you could rap.’ He was like, ‘You’re really gonna do something big with this.’ So that was just an honor. Coming from the D, that was the person that showed us that it was real, showed us you can be the biggest in the world from where we from,” Sean shared.

He also said the song that features Eminem may end up on his album or a different album but he was unsure.

When asked about Kanye West’s Yeezus, Sean explained that it was “fresh” even if it wasn’t his favorite.

“So first, you gotta just respect that. You gotta respect somebody pushing the envelope and being a Rap album,” he shared. “As far as the album goes, it ain’t my favorite Kanye West album, but I think it’s fresh.”

His favorite West album, he said, was Late Registration.

Big Sean also went on to discuss a different topic. The emcee touched on Travi$ Scott’s old tweets, where he dissed Big Sean. According to Sean, there are no hard feelings between the two.

“It’s crazy because we was in the studio with Travi$ about a week and a half ago, and he was listening to my album like, ‘Yo, Big Sean, you might be the greatest rapper.’ He was flipping out but that just goes to show that opinions change. People be changing over time.” He added, “That’s my dog.”

Scott’s old tweet in question can be seen below. 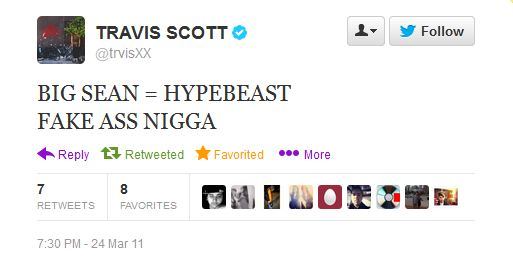 More of Big Sean’s interview with The Breakfast Club can be seen below.

Big Sean has spoken about Eminem’s reaction in the past.

“We talked for like three hours (in the studio) before we played any music,” he told Sway. “Then he was like alright, I guess I’ve got time to hear a couple songs… And then when it was all said and done he was like, ‘I’ve never been so impressed or surprised about an album. This one is gonna be big for you.’”