Last night, the Miami Heat defeated the San Antonio Spurs in a decisive game seven of the NBA Finals. During the Heat’s second consecutive championship run, several members of the music community were on hand to support. Lil Wayne, Justin Bieber and Lenny Kravitz had all attended games in the series. Also notably, Flo Rida’s manager was reportedly asked not to attend the last two home games of the series, following a previous verbal altercation with players, leading to his ejection.

Following the game, Drake was filmed by an ESPN affiliate trying to gain access to the winning team’s locker room. Told “media only,” the platinum Cash Money Records artist was turned away, and apparently cursed at security.

At the after-party in Miami, Florida, Drake was photographed partying with Finals MVP Lebron James at Club Story. 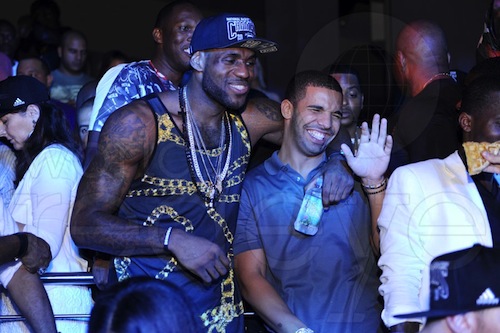 Drake is a fan of basketball. His first video after signing to YMCMB in 2009 was the Kanye West-directed “Best I Ever Had,” a video featuring a female basketball practice. Drake also played handicapped basketball player Jimmy Brooks on “Degrassi: The Next Generation.” 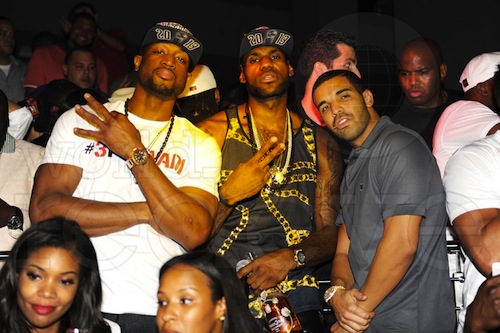 In February of this year, Drake’s Rap mentor, Lil Wayne, was entrenched in a battle over his relationship with the Miami Heat and their fans. Although Wayne later clarified his frustrations, the dispute solicited opinions from other Hip Hop artists Trick Daddy and Uncle Luke.

RELATED: Lil Wayne Claims He Was Kicked Out Of Miami Heat Game For Rooting For Los Angeles Lakers