Last weekend, Daylyt made headlines for his Battle Rap actions and he’s done it again this weekend, after taking off his clothes in his latest match-up against Dialect at United Kingdom’s Don’t Flop “Verdict” event. The battle was streamed live on USTREAM for a worldwide audience. During the bout, Daylyt made a reference to stripping naked and then actually stripped, stopping the battle momentarily.

He then took off his pants and shirt and posed for about two minutes wearing nearly nothing, while things settled down with audience members. Daylyt then continued rapping.

“I didn’t bring a weapon, nigga. You are the first nigga in Battle Rap history to get killed by a naked nigga,” he told his opponent, Dialect, to finish the round.

A clip from the battle can be viewed below, courtesy of Don’t Flop.

Photos of the event have been released by people in attendance and people viewing the battle through the stream. Kyle “Avocado” Gray, who has done extensive video work with King of the Dot, tweeted this image of the battle on his Twitter feed. 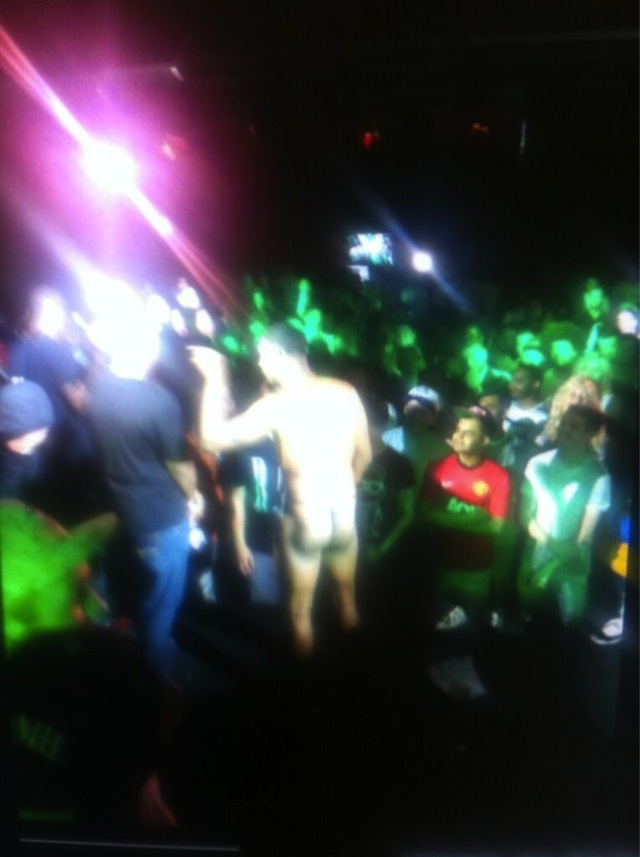 Daylyt made headlines last weekend by bringing a pillow and laying down during his battle against Math Hoffa for Rap Battle Network’s Barfest event. He then had a confrontation with Math that ended the battle abruptly. More on that can be read in DX’s recap of the event. In the past, Daylyt has released images of himself naked or almost naked and he has released a music video called “Ass Naked With My Shotgun,” which has content warning restrictions on YouTube. Additionally, he has dressed up in various costumes for battles. He once dressed as a member of the Ku Klux Klan for a match-up. Day has also become known for his ski-mask, which he often wears during bouts. Daylyt is commonly recognized for the mask of Spawn, which he has tattooed on his face.