Jay-Z, Nas, Timbaland & Justin Timberlake Pictured Together In The Studio

Jay-Z and Instagram have amassed quite a reputation. Lenny S.’s Kodak Lens account and Jay’s own account have posted a series of in-studio photos of him with various collaborators. One of the Nation’s newest artists, Timbaland, has been a fixture in many of the photos—ranging between Rick Ross and DJ Khaled to Mike WILL Made It.

Late yesterday (June 5), a new photo posted by the Kodak account, including both Jay-Z and Timbaland. This time, the pair was joined by Justin Timberlake and Nas: 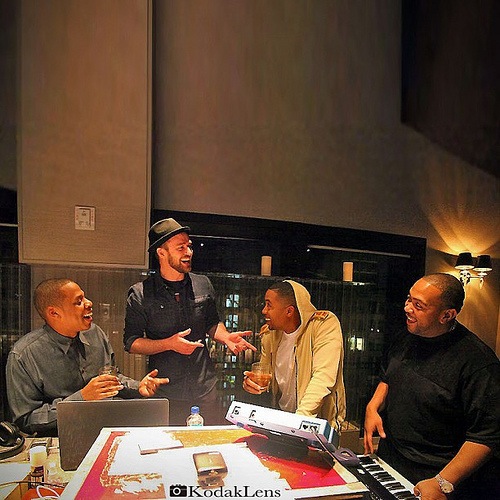 Nemeses a decade ago, Jay-Z and Nas later announced peace with a ceremonious signing of the latter to Def Jam Records during Jay’s tenure as label president. The Brooklyn-Queens pair have since collaborated on “Black Republicans” from Nas’ 2006 Hip-Hop Is Dead album, “Success” from Jay’s 2007 American Gangster album, and a collaborative feature on Ludacris’ “I Do It For Hip Hop” from 2008’s Theater Of The Mind. Nearly five years removed from the last, it appears that the pair (along with JT and Tim) may collaborate again.