Jay-Z & Raekwon Photographed In The Studio Together

In the last three years, Wu-Tang Clan emcee Raekwon has been a recurrent collaborator with Kanye West and G.O.O.D. Music. The Staten Island, New York veteran lyricist appeared on My Beautiful Twisted Dark Fantasy, as well as Cruel Summer. However, Rae, who ran in similar circles to Jay-Z since the early ’90s, has never released a track with The Throne’s other half—Brooklyn, New York emcee-turned-mogul, Jay-Z.

That may be changing, according to some recently posted photos by Jay-Z. The Roc Nation founder and the IceH20 Records founder were photographed together, inside of what is believed to be Hov’s studio: 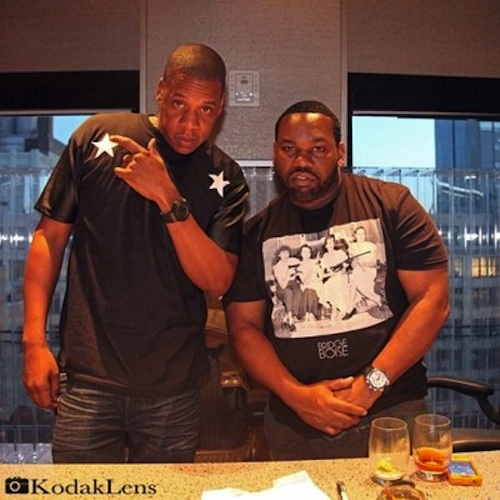 In recent weeks, Jay has posted photos of himself in the studio with the likes of Rick Ross, DJ Khaled, Timbaland, Mike WiLL Made It and others.

In 1994, a pre-album Jay-Z made an appearance with Wu’s Ol’ Dirty Bastard and affiliate Shyheim on the Big Daddy Kane posse cut, “Show N’ Prove.” Additionally, Jay worked with RZA on “So Appalled” on Kanye’s aforementioned last solo album.