Over the weekend, Cash Money founder Birdman welcomed a pair of new face tattoos and he turned to his Instagram account to show off the new additions to fans.

MTV News reports that the first tattoo, which shows the image of a truck, is in fact the TRUKFIT logo and serves as a tribute to Lil Wayne’s skate-inspired clothing line.

The second tattoo Birdman received were the letters “GTV,” which is an acronym for his Grand Touring Vodka. Neither of the recent inked-up additions serves as the first time the Cash Money CEO has showed support for his various artists and endeavors with tattoos.

Just a few weeks ago Birdman received a “Rich Gang” tattoo in honor of the upcoming compilation album Rich Gang: Flashy Lifestyle. He also has a portrait of Lil Wayne tattooed on his upper chest. 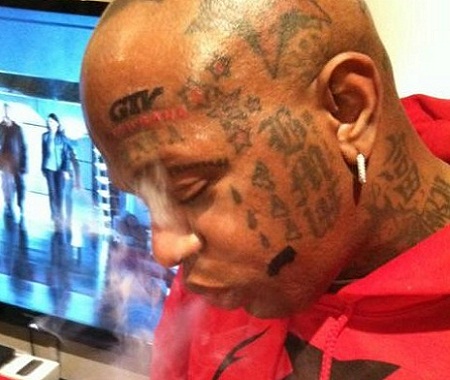 RELATED: Birdman Says Lil Wayne’s Most Recent Seizure “Had Nothing To Do With Drugs”