Last night, 2 Chainz was arrested and released for marijuana possession in Maryland.

According to TMZ, Tity Boi was traveling in a white van with six other passengers when Maryland State Police pulled him over around 10 p.m. The cops then arrested him for possessing weed, and he was the sole passenger taken into custody.

After being released from the station, the Hair Weave Killer took to Twitter to vent his frustration, posting a snapshot to Instagram with cops who asked for a picture that can be seen below. He claims that marijuana wasn’t to blame for the arrest and that he was actually arrested over a weed grinder, which he said belongs to his security guard.

“Locked me up and then Wanted pictures smh,” wrote 2 Chainz. “We to jail for a grinder??? REALLY??? … I work hard and pray even harder , we gone always b good yall…. Not to mention my security said it was his and they said , he don’t smoke ,, how da fuk u know? Haha wut a valentines day!!!”

2 Chainz recently made his acting debut on 2 Broke Girls. On the musical tip, he released his major label debut Based on a T.R.U. Story last year, selling 533,000 copies to date. 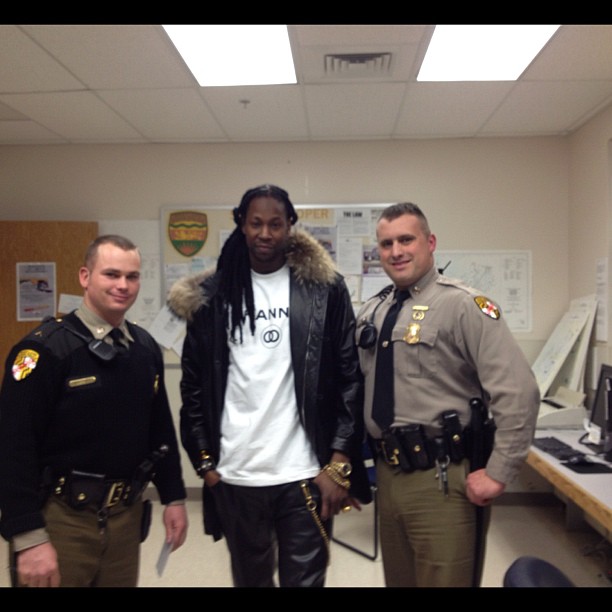 UPDATE: 2 Chainz was acquitted on the February drug possession charges this Wednesday (April 24). The Los Angeles Times reported the acquittal.