It looks like rapper Webbie may have gotten himself into some legal hot water. According to a recent report from TMZ, the Louisiana rapper was recently arrested on charges of battery and robbery.

Reports indicate that Webbie allegedly kicked a woman down a flight of stairs this morning at a local Chase Suite Hotel after he was banned from the hotel premises. Following the assault, the “Independent” rapper stole $340 from the woman’s pocketbook.

While details are unclear at this time, a representative for the rapper tells a different story of the events. He says that Webbie met the woman at a party last evening, but never assaulted her. He went on to say that Webbie did take the money from the victim’s purse, but insists that it was originally Webbie’s money that had been stolen from him.

Webbie was released from jail on $9,000 bond earlier today and plans to fight the charges.

UPDATE: Yesterday (September 14) Trill Entertainment, Webbie’s label, released the following statement via email: “Webbie has reached out and spoke to the woman who shall remain nameless and her mother, they expressed to Webbie they know and deny any and all allegations brought against Mr. Gradney.

Webbie would also like to go on record saying he does apologize to his family first and fans for this unfortunate misunderstanding; Thank you for all the support.” 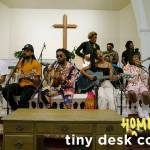 J.I.D, EarthGang and the rest of the crew's major label debut 'Spilligion' is available now.