As one of the first artists on Rick Ross’ dominant Maybach Music Group roster as a member of the group Triple C’s, Miami’s Gunplay has had the opportunity to grow as an artist as quickly as the MMG roster has grown and flourished as well. With one Triple C’s album already under his belt (2009’s Custom Cars & Cycles) plus the widely received single with Waka Flocka Flame, “Rollin’”

, it’s now time for Gunplay to begin unleashing new material on the masses. His mixtape, Bogota Rich came out March 9th, followed by a video for a track called “Bogota,” but he also took some time to speak with HipHopDX about his upcoming Bogota EP, the track he did with Kendrick Lamar, the escort service he’s starting, and more.

HipHopDX: Though you’re part of Triple C’s, you’re branding yourself as a solo artist more heavily lately. What’s your goal with that?

Gunplay: Ultimately, to get a solo deal, put out a solo project, build my brand. Be self made.

DX: I noticed your fellow Triple C’s member Torch is also coming out with a solo project next month. What’s the status of Triple C’s? Are you guys branching out or is the group still standing strong?

Gunplay: A little bit of both. Look out for Color, Cut, Clarity, that’s the sophomore Triple C’s album. For now we’re just building our own brands and we’ll come back together and make another project. There’s no release date for Color, Cut, Clarity as of yet. But I got a deal with Def Jam [Records]/Maybach [Music Group], you know, my solo situation…it’s on the way.

DX: How did the track “Cartoon and Cereal”

with Kendrick Lamar come about? What’s that going to be used for?

Gunplay: It’s a track Kendrick [Lamar] had. He got in contact with a friend of mine named Geda K. He reached out and sent me the record and I knocked it out. I thought it was for his album but it got leaked anyway. Everybody showed it love. It was dope.

DX: If you had a day to watch cartoons and eat cereal, what would you watch and eat?

Gunplay: I’d probably watch Family Guy and eat Cap’n Crunch. The regular, not the Crunch Berries. The one that tears the roof of your mouth up when you eat it. 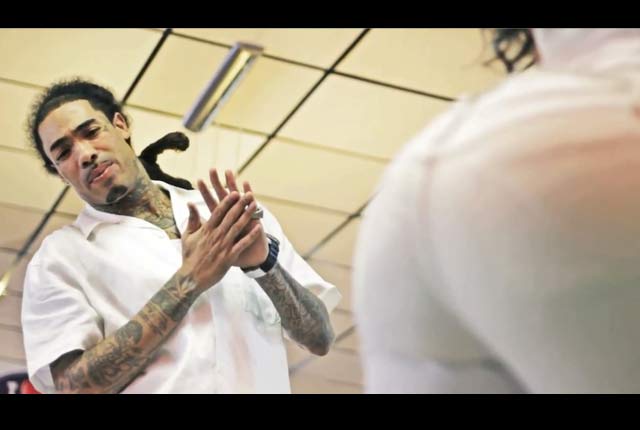 DX: You have a crazy level of energy in your videos. Shoots are a long day, so what keeps you going?

Gunplay: I don’t know. I don’t ever get tired [in front of] that camera. I just keep going. I got a lot of energy. That’s just me as a person. I get a little tired? I drink a Red Bull. I enjoy it, I have a lot of energy built up inside, and when I get on stage or shoot videos I get to let it loose.

DX: Most of the Maybach Music roster has that energy. I see you guys out and about at parties, especially strip clubs, and you’re always live. What’s the best strip club party you’ve been to lately?

Gunplay: There are so many, man. Um…the last one that was real memorable was the one for Rick Ross’ [Teflon Don] album release party when he came to King of Diamonds in a helicopter. That was dope.

DX: “Bogota Rich” came out March 9th, and you have an EP named Bogota dropping in the near future as well. That’s a whole bunch of Colombia references and I noticed your last name is Morales, do you actually have roots there?

DX: Your video “Bogota” also featured some interesting scenes and some of the background images looked like you might have gone abroad to film…where was it shot?

Gunplay: Right now I’m not able to travel out of the country for a little while, so I had to bring all that to Miami. I picked some dope locations and did the damn thing.

DX: Do you think with a name like Gunplay you’ll have even more problems traveling when the time comes? Or even have it hinder you in other ways?

Gunplay: Not really. I was ok for the first couple of years while I was on tour and then I got in a little trouble and now they won’t let me go. Lawyers can fix that. The only thing that might hinder me is they won’t let you say “gunplay” on radio, etc. That’s why I have my alter ego, Don Logan. So when the time is right and I need to change my name because it is hindering me, if it is, I have that plan B, and I’ve been promoting that for years now. Some people know me as Gunplay Don Logan.

DX: Tell me about the escort service you’re planning on starting up.

Gunplay: Look out for Apples and Onions escort company, coming soon. It’s going to be across the United States in all major cities. Apples and Onions, that’s right. I handpicked all of them. They all got to have a waist like a wasp and an ass like a horse! [Laughs] It’s coming soon, trust me.

DX: Where can we find your work in the upcoming months?

Gunplay: The next project we’re dropping on MMG is Self Made, Vol. 2. Look for me on there. My album is untitled so far, but when you hear the Bogota EP you’ll get a gist of what’s going on with that album, which is yet untitled. I’m keeping all of the info about that under wraps.

RELATED: Triple C’s – I Want It All [Interview]