Christmas is the time to give back to those who are in need, and one of Hip Hop’s biggest is making sure to do the spirit of the season justice. Recently, Rick Ross took to his Miami hometown for the Rick Ross Charities Sixth Annual Toy and Food Giveaway.

According to a recent video recap from Maybach Music Group, the Rick Ross Charities group joined forces with Senator Oscar Braynon II and former New Orleans Saints cornerback/founder of the 34 Ways Foundation Mike McKenzie to host the sixth annual food and toy drive. The Maybach Music impresario explained the importance of the event and the joy he gets from being able to give back to his fellow Carol City residents.

“This is the sixth year that we actually did this [drive]. We did this right the heart of the city, right in Miami,” Rozay explained. “We really invited everybody and we just go all the way out…and you know, it’s just a lot of people that come out every year. They kind of look forward to us, so it’s all love. Every year, I just think of different ways we can do more and more, but I know this right here is important because it’s right in the heart of the city. It’s right here where I’m from…Carol City.”

The annual Christmas event isn’t the only charity drive that the Bawse holds every year. The Miami rapper also holds the Be Out Day event to help provide Carol City students with school supplies. 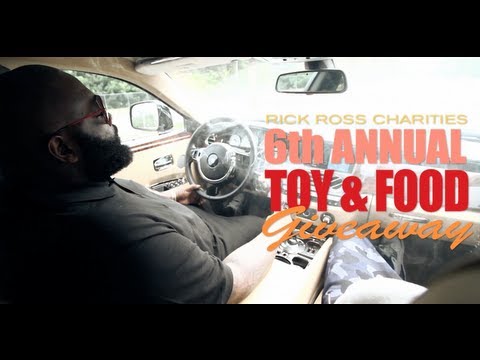