Fashawn Talks "Ecology," Being A Rapper's Rapper, His Message & Education

In the middle of a chaotic room in Los Angeles, California, Fashawn sits calmly. He grabs a blue pen and a sheet of lined, yellow notebook paper, pensively looking down. He’s focused. Based on his catalog, one would assume he has this same focused ferocity when he’s about to write a rhyme. On this evening however, he’s working on finalizing the set list for his show, methodically making changes and decisions, weighing his options.

This methodic characteristic has traveled with him for some time, helping him navigate the world he talked about meeting on his debut album. Backed by Exile, Fashawn hit the Hip Hop globe with a bang on Boy Meets World, becoming HipHopDX’s Rookie of the Year in ‘09, then “graduating” this May. But now, he’s readying his next steps, preparing for 2012, ready to share what he’s learned after meeting the world in next year’s The Ecology. “It’s not just about my life,” he says of his next solo full-length release. “It’s about everyone’s life, our life.”

At the moment, he’s carefully preparing the aforementioned set list for his first solo headlining show in Los Angeles. He welcomes me to a small, smoke-filled room. More than a couple respected emcees and producers are scattered around relaxing, sharing stories and laughing in camaraderie. All are here to show support for the Fresno emcee. Sporting a grey Eazy-E shirt, black shorts, black socks, a black snapback and black Converse All-Stars, he greets HipHopDX and politely asks for a moment to finish that set list. With a pen in hand, he finalizes the list and consults one last detail with longtime deejay, producer and collaborator Exile before putting that pen away. He’s ready.

HipHopDX: We spoke in 2009 when you got Rookie of the Year for HipHopDX and…

Fashawn: …Aw man, that was big for me, straight up and down.

Fashawn Talks About Next Album, The Ecology

DX: Now, at that point, you said Boy Meets World was about the last two decades of your life. You also said this next album was going to be about the next two decades…

Fashawn: …Yeah, and the present, man, all the shit that I’m saying right now. I’m just documenting life exactly how I see it. My perspective has changed. It’s been a little altered by having these new experiences with people and with loyalty and business. It’s really helped me figure out who I am as an artist.

DX: What taught you that? What made you realize what you did with regard to loyalty?

Fashawn: Losing old friends, even some family members. Losing them relationship wise and also physically, like people going to heaven. It’s really taught me to stay solid and keep it 100% with all of the people that I love, to keep that bond with my people. It’s a good feeling, man. That’s why I love waking up every morning. I do this for the people I love, my fans, my family, my homies, everybody, man, everybody in this room and everybody outside of this room.

DX: So is that still the theme of this album? I know you said your perspective has been altered somewhat.

Fashawn: What I wanted to do with this second album was document this world how I saw it after meeting it, to let you hear about the scars that I’ve developed after leaving my immediate environment, which was Fresno, and after entering the real world. There’s stories about that on this album. But, there’s always a moral to the songs. It’s not just about my life; it’s about everyone’s life, our life. That’s what The Ecology is about, it’s merely my reaction to the people I come in contact with, the places I go and I just try to decipher shit that seems illogic, that seems like, “What the fuck? Why is this happening?” I spend my time with the page trying to decipher life and trying to make sense out of it. I think that’s why I have so much fucking music because life and knowledge is infinite. I’m forever a student of this. I know I said, “I’m not a student of the game, I’m a mothafuckin’ drop-out,” but once you develop a higher learning, you see that you’ll always be a student.

DX: It’s interesting because you’ve met the world but these new experiences have been guiding your new work.

Fashawn: Definitely, definitely. Wisdom that I’ve acquired from people that I really admire, brothers like Brother Ali, The Grouch and brothers like [Thurz], Blu [pointing to them in the room], all my brothers, man. To be able to build with them is a wonderful thing. With my fellow artists, that’s where I get my inspiration as well, surrounding myself with great people and artists who live or die for this shit.

DX: In May, we highlighted your career. One of our editors, Omar Burgesses spoke about how fellow artists like Brother Ali light up when they talk about you. I know I got the same sense when I spoke to Evidence about you. Why do you think rappers have that kind of reaction to you?

Fashawn: Well, more than anything, I’m a rapper’s rapper. I spent time perfecting my rhyme, my technique, my style, finessing my patterns and I’m really a scientist, a chemist when it comes to this. That’s the approach I take. As a fellow emcee, a fellow swordsman, you’ve got to respect it. Niggas know I’m thorough with my shit. They know everything I say is real. They see it. I think that’s why. They know I wouldn’t steer them wrong no matter what the fuck I’m doing, whether it’s “Skating Down The Block”

or “Hey Young World.” It’s still me and they know it’s still sincere. 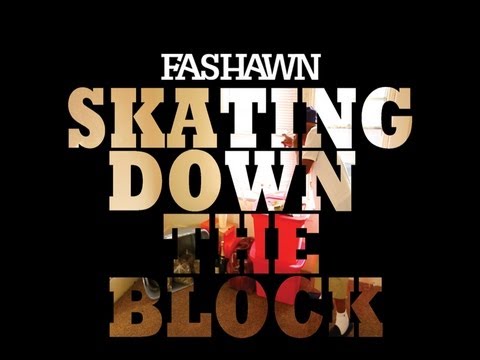 DX: It’s interesting that you mention “Hey Young World,” because in listening to that, I often wonder who was there to give you that message when you were younger? That’s besides Slick Rick, obviously.

Fashawn: [Laughs] Um, my teachers and big homies who refused to buy the beer for us. “Can you get us some beer?” “Nah, little homie. You don’t need to be doing that.” People in my community, man, pastors, ministers, I used to build with everybody. They gave me positive inspiration. It wasn’t all bad. There’s a gem in everything. In every part of life, there’s always a gem. You’ve just got to find it.

DX: You talked about teachers. You also mention school in some of your rhymes. So, what was it about certain teachers, how they reached you and how they were able to influence you in a positive way? That’s interesting because now you’re the one teaching.

Fashawn: Yeah, ultimately, right? The biggest thing I learned from my teachers was that they was like, “I’m not here to tell you how to think, what to think or what’s right or wrong.” They said, “I’m here to educate you on how to think for yourself and you decide what’s right in the world. You decide what’s wrong and eventually, you’ll become a leader.” That’s what I was taught and that’s what had the biggest effect on me. That’s the origins of this shit. That’s what made me conscious of what I was saying, even if it was negative or positive. The faith that they had in me, what they saw in me that I didn’t even see, that really inspired me to go find that. Whatever they saw in me that I didn’t know, that made me want to go find that and excel at that and be the best at that.

DX: It’s interesting to picture you in school.

Fashawn: Me in school? I was that kid that ditched a lot and showed up late smelling like weed. But, there were still teachers who saw something in me. I don’t know what it was but they sat me down and gave me the game, gave me knowledge. I was one of the few who listened, really soaked it in and applied it to my life.

DX: “Those who took heed, where the ones who succeeded…”

DX: On “Boy Meets World,” you say you began to write rhymes when you were nine years old. “First time I remember, ever feeling alone.”

Fashawn: First time I remember feeling alone, yeah. All I had was my pen and my pad, and a little recorder to record myself. I’d speak my life to whomever I decided to play it for. That’s when I started to focus on who I was already, at nine, I was already thinking on that plateau. So, I just continued to write and pour whatever was inside of me out.

DX: There are probably a lot of other nine year-olds out there who don’t have that outlet, but they do have your music.

Fashawn: [Nods in agreement] Yes sir. Indeed.  That’s why I feel like I’m a big brother to some, like an uncle to some cats. Niggas don’t look at me just as a “rapper,” in that sense. I try to talk to them and give them the game like a big brother or an uncle would to his nephew or a father with his son. I call my fans my cubs. It stems from the Grizzly Gang, but they’re my cubs. I’ve got to take care of them and feed them. Whether it’s knowledge or I’m throwing Grizzly Snacks into the crowd, I give them that food, man. I give my listener that food.