After canceling his original New York City, New York debut an hour before showtime, Frank Ocean returned to the Big Apple last night to perform his first solo concert in the city.

Gracing the stage at 9:30 p.m., the Odd Future crooner, clad in a jacket, white button-down shirt, slacks and a signature red-and-white bandana tied around his head, opened with a cover of Sade’s “By Your Side,” segueing into “Swim Good” before addressing the nearly sold-out crowd. “Nostalgia… I don’t know what it means to people,” he said, leading into “Thinking About You,”

“but to me, it means romance that we’ll never get back.”

As clips from The NeverEnding Story screened behind him, Frank ran through “Dust” and “Songs for Women,” asking, “What’s the world without a love song?” Flinging his jacket to the side of the stage, he powered through his standout guest hooks on Jay-Z and Kanye West’s “No Church in the Wild”

and “Made in America” as images of the American flag flickered in the back of the stage.

Frank used the opportunity to perform cuts from his upcoming retail debut, performing renditions of “Disillusioned,” “Super Rich Kids” and “Real Love,” during which he abruptly left the stage and returned with a teacup and saucer. “We All Try” led into the epic “American Wedding,” where Frank hopped on Guitar Hero to show off his fret skills during the guitar solo. Before hopping on the Rhodes to play an encore of Beyonce’s “I Miss You,” he soulfully crooned through “Novacane” and “Strawberry Swing,” a mellow cap on the evening.

Watch clips from the performance below. 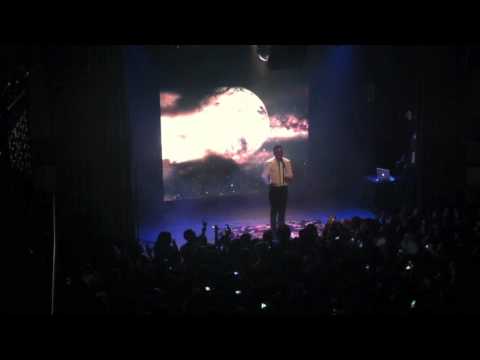