This May 22, the Echoplex club in Los Angeles, CA will host its first annual Rhythm and Soul for Relief benefit concert. Featuring some of the Left Coast’s finest Hip Hop, funk reggae and soul acts, the proceeds from the show will go to the victims of recent disasters in both Japan and Haiti through the international relief aid group Operation USA.

The show is slated to feature Hip Hop trio Dilated Peoples, funk group Breakestra, cumbia band Very Be Careful, the Latin Assassins and the new reggae all-stars The Good Times featuring Black Shakespeare. In addiontion, holding down the one’s and two’s for the evening will be DJ 2High, Music Man Miles and Tom Chasteen.

Tickets will start at $15 at the door and $8 in advance. Fans looking to attend can find more information at the Ecoplex’s website. A flier can be seen below. 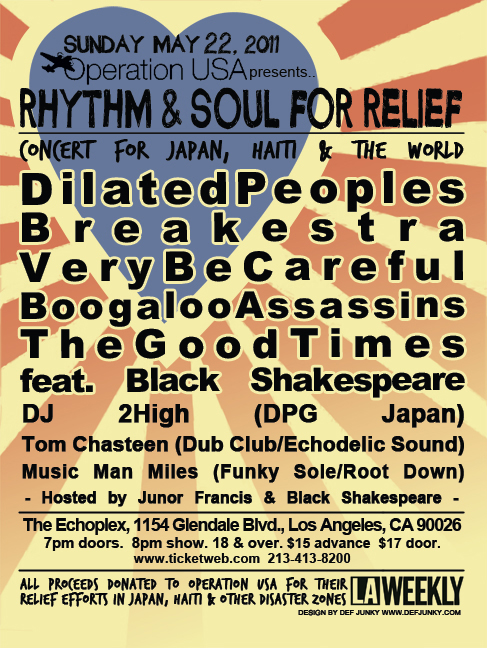 In other news, Coalmine Records has teamed up with UniqueSquared.com for a new remix contest in celecbration of the release of their five year anniversary compilation album Can You Dig It?. The indie powerhouse is asking producers to remix El Da Sensei’s recent Sean Price amd Bekay-assisted single “Everyday in the Streets,” off of his Global Takeover 2: Nu World Order album.

Unlike other remix contests, however, producers are required to sample Barry De Vorzon’s theme song from the 1979 gang film The Warriors, the film from which the label derived the titled of its compilation LP. Winners of the contest The Nu World Remix EP and a prize package from Unique Squared.

Producers looking to enter can download the song sample, acapella and itinerary info from one of two links, found here and here. Entries are due by May 16 to the email address coalminerecords@gmail.com.

Finally, rapper Kidd Kidd is preparing to release his long-awaited project The Reallionaire tomorrow May 3 via The Orchard. The former Young Money Entertainment artist recently linked up with Sha Money XL and his Big Dream Ventures imprint to release his debut project.

Fans looking to pre-order the New Orleans emcee’s album can hit the pre-order link to make their purchase. A tracklist for the album can be found below.