Between Cheech and Chong’s rumored Up In Smoke 2 and Method Man and Redman’s highly anticipated sequel to How High, bud buddies have a lot to be excited about. Now, Snoop Dogg and Wiz Khalifa are giving fans another reason to roll up a fatty with their upcoming stoner comedy film High School and its accompanying soundtrack

Billboard.com got the skinny on the upcoming comedy, which Snoop describes “a comedy stoner movie, a little something for the stoners.” In an exclusive interview, Snoop revealed that High School, which is set to begin filming this May, really began out of the duo’s collaboration on the remix of Wiz’s single “Black and Yellow” from earlier this year.

“Just being a fan of his music and likewise, he called me to be on [the ‘Black and Yellow’] remix,” said Snoop. “And from the remix, we became close friends and spent time together…[we] made six or seven songs and created an idea to do a movie and a soundtrack, and just a bond – to build a friendship and build a brotherhood.”

In related news, Snoop has teamed up with skate clothing brand Neff for a new t-shirt. All of the proceeds for the shirt will be donated to Operation USA, a relief organization aiding the Japanese communities affected by the recent earthquake and tsunami. Snoop and company are looking to raise up to $50,000 with this latest project.

“I got so much love for Japan that when I heard about the recent disaster I knew I had to do what I could to help,” said Snoop. “My Japanese family member, DJ 2High, called me and let me know how bad it really is, they need a lot of support and I hope that this tee that I am doing with my Neff family will help make a difference. I said it before and I will say it again, Keep your head up Japan.”

The t-shirt can be seen below. The shirt is currently on sale at Neff’s website for $20. 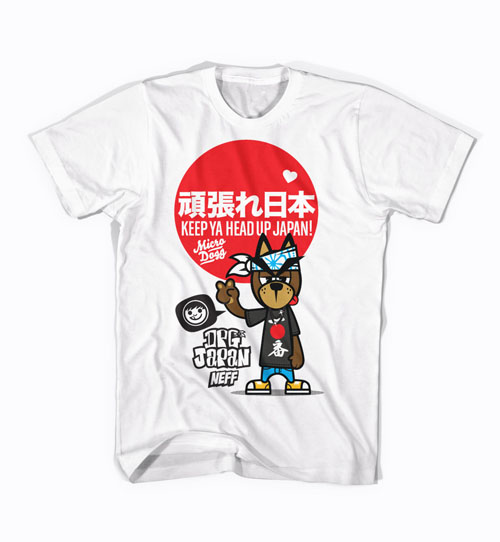