Rappers have always taken the extra step to keep their kick game is proper, and you need look no further than artists like Kanye Weat and Swizz Beatz’s recent collaborations with shoe companies for proof. Now, ?uestlove of the world famous Roots crew joins that list, as the iconically-coifed drummer has linked up with Nike to release a new series of exclusive hi-top Dunks.

Slated to drop tomorrow via UNDFTD, ?uest’s custom kicks – dubbed the Dunk Hi Bz – will come in two colorways, red and yellow. The former pair will feature a five-button lace cover and a silhouette of ?uest on the tongue, while the later pair will feature an etching of ?uest’s head on the side heel.

This isn’t ?uestlove’s first sneaker venture with Nike. The drummer also collaborated with the company on a custom pair of Air Force 1’s in 2008.

An image of the shoes can be found below. Sneakerheads looking to cop a pair can go to UNDFTD’s website for more information. 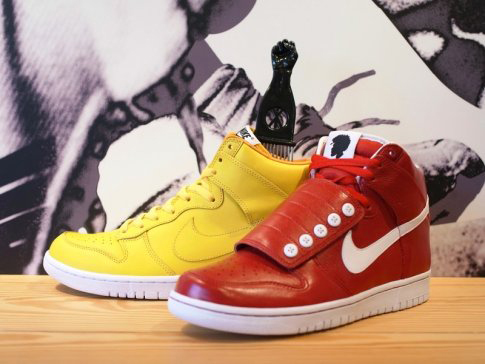 In other news, Eminem’s recent Super Bowl XLV advertisement with Chrysler automobiles continues to yield major benefits for the company, as Canadian Chrysler dealerships are reporting that the ad sparked significant interest in the new Chrysler 200 model.

“What a phenomenal job they did on it,” said the general sales manager of Windsor Chrysler Mike Hogue. “It was thought-provoking, it was hard, there was soul in it…before [the ad], there hadn’t been the interest yet; this car [the Chrysler 200] was brand new and had just hit the market. After it ran, we started receiving a lot more calls and inquiries. Now all of a sudden this jump-started the whole intrigue into the vehicle.”

John Skelton, sales manager of another Canadian dealership Provincial Chrysler, echoed Hogue’s statement, saying, “I thought it was a pretty gritty ad. The reason I liked it — obviously Chrysler is in the middle of a resurgence, trying to change things around. Windsor is very similar to Detroit. It’s very reliant on the auto industry and things are starting to come back here and things are starting to come back to Detroit.”

She also added, “I felt a certain power watching the ad for the first time, but I’m internal, I’m Chrysler Canada; we lived through the bad times. It’s funny, this seems to resonate with anybody throughout Canada and the United States because it’s about overcoming adversity. And I think people can relate to that.”

Finally, California group the Kottonmouth Kings are preparing their latest offering Legalize It EP for an April 20 release. The group – who recently added Oregon emcee Dirtball to their ranks – said this digital retail release will feature select songs off their twelfth studio album Sunrise Sessions, due out later this year.

“It’s that wonderful time of the year, a time of renewal and new beginnings,” said emcee Brad X. “Look for our new single ‘My Garden’ to drop in early April and the world premiere of the video on 4-20! It’s an exciting time in our career, as we are in our 15th year as a group and still creating some our best songs. We are anxious to share the good vibes with the world and what better time than on 4-20!”

Fans can also check the Kottonmouth Kings out on tour this April in promotion for their EP. The dates can be found below.