“The Golden Age of Hip Hop Pt. 3: A Birthday Celebration for Eric King!” will begin at 9:30 PM, with doors opening at 8 PM. Tickets can be purchased through Live Nation for $25 or at the door for $35. More information can be found at Black Monopoly Records’s website, and a flier for the even can be seen below. 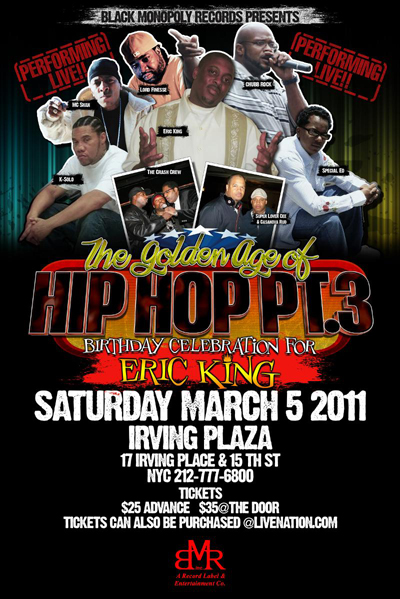 In other news, underground producer !llmind has linked up with Bay Area emcee Uzi Scott aka Lefty of the Bash Bros for a new project Ill Thoughts EP, due out later this year. Like !llmind’s collaborative LP with Brooklyn’s Skyzoo last year Live From the Tape Deck, this latest EP will feature the New Jersey producer handling all of the beats while Uzi takes care of the rhymes.

“We coming together to create some psychedelic hardcore Hip Hop,” said Uzi Scott. “We really looking to test the waters and if the public demands it, we will head back in to deliver more. It’s a pleasure to go in with such a talented producer, in my eyes he is one of the best all around producers that the Hip Hop genre has to offer.”