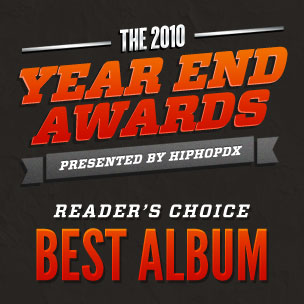 Last Day To Vote For The 2010 Reader's Choice Best Album

The 2010 HipHopDX Year End Awards are coming, and I’m sure like everyone else you are wondering what albums our staff has anointed Album of the Year, Best Emcee, Best mixtape, Best Rising Star and the list goes on. However it’s not just us picking the winners this year. We want your opinion, as our readers help make our voices matter. So well before we close the books on 2010 we need your help in choosing the best Hip Hop album of 2010.

As mentioned above, The Awards don’t end here. Each day starting Monday Dec 13, 2010 we will be releasing the winners for your enjoyment. The Schedule is as follows:

Thanks for helping us out and we look forward to the new year of music, culture and artistry.

Update Mon 13, 2010: The first set of awards are up for you to check out Emcee of the Year, Trend We’d Like To See Die, Slept-On Album Of The Year. Dive right in and check back as we update daily.

Update Tue 14, 2010: Day 2 of 5 of our awards is now in full effect check out the winners for Producer of the Year, Comeback of the Year, Mixtape of the Year.