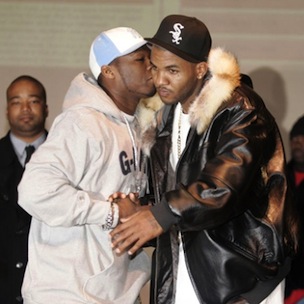 The homies over at Complex whipped up this soundboard in honor of Need For Speed: Hot Pursuit. We dig it because it allows us to re-live some highlight soundbytes from 50 Cent vs. Game, which is still going on right now on Twitter, courtesy of Tony Yayo and Game, as well as Mase vs. Capo Status and a few others.

Last time we loose link’d you, we showed you how one devoted listened calling himself “The Rap Genius” had broken down Kanye West’s lyrics in My Beautiful Dark Twisted Fantasy to very last compound, allowing those unsure and those out of the know to get what Mr. West is saying. Now he’s at it again with Jay-Z. In celebration of Decoded, Jay-Z’s memoir where he’s explaining some of his most potent lyrics, Rap Genius gives his opinion and analysis. If you’re like us, you’ll be impressed too.

Papoose Gets Laughed At

Lastly, one of our writers brought this our attention. Brooklyn emcee Papoose is heralded by some as one of the best spitters in New York. Going back to his Kool G Rap days, dude just can’t get a break. We like his music, and even featured him last year on the site. However, read what one person with a whole lot of time has built, showing why they disagree with that statement.

We don’t necessarily agree, just thought this was funny – unless Kay Slay is reading this, then we’re not even smiling.