Lil Wayne To "Start From Scratch" On "Carter IV"

Lil Wayne’s manager, Cortez Bryant, has revealed that Lil Wayne is likely to start the recording process for Tha Carter IV from square one.

In speaking with SPIN about the Cash Money rapper, Bryant explained that many of the tracks on Wayne’s upcoming I Am Not a Human Being – which will be a full album, not an EP as previously reported – were originally intended for Tha Carter IV.

“I know once he got out [of jail] those songs would be so old to him,” said Bryant of the tracks.

“He’s going to probably start from scratch,” added Bryant. “I know how he records—he’s in the studio every single day. That’s his life.”

I Am Not a Human Being is set to be released on September 27. Tha Carter IV is not expected to hit stores until next year. 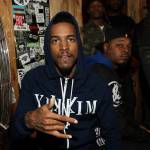 But the Chicago native says it was just a mixtape — not an actual album.

The former couple is currently embroiled in a contentious divorce after 24 years of marriage.