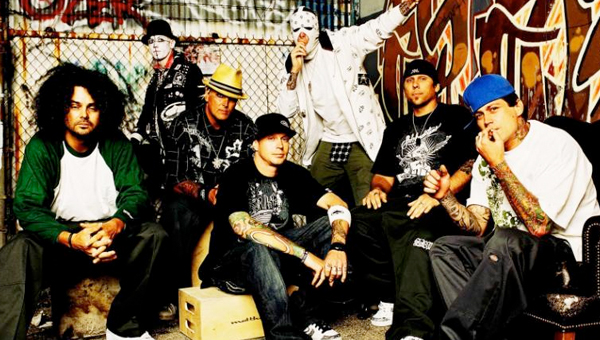 For over 15 years, the Kottonmouth Kings have helped carve a space where Rock and Rap can coexist happily, under a haze of marijuana smoke. The Placentia, California natives decided to celebrate the unofficial pot-smoker’s holiday of 4/20 with HipHopDX in celebration of their forthcoming Long Live The Kings album.

KMK frontman Brad Daddy X, a former Ruthless Records artist spoke to DX about the group’s acceptance in the Hip Hop community, and their committment to using their independent chokehold to assist veteran Rap acts like X-Clan, Swollen Members and Potluck.

HipHopDX: Looking at the Kottonmouth Kings “katalogue,” which song would you most encourage somebody who’s not smoking their first joint, spliff or blunt – but listening to their first Kings song to check for? For a devout Hip Hop fan, where should it begin?
Brad Daddy X: I would say start in the present and work backwards. “Great When Your High” off of the new Kottonmouth Kings album Long Live The Kings, “Party Monsters” featuring Tech N9ne, or the “Long Live The Kings” the title track would be good Hip Hop bangers to get your feet wet. Other Hip Hop bangers that are considered classics are “City To City” another track featuring Tech N9ne, or “Put The Down” featuring Cypress Hill. We have been together as a group for 15 years, so our catalogue is so extensive. We produce, record , manufacture, and promote our own records through Suburban Noize Records, a label I founded 15 years ago. We write our own rules and have created a thriving movement that exists outside of the mainstream music arena.

DX: One of the best remaining print publications for Rap is High Times magazine. They even had a Rap label back a few years ago, but how have they helped your career and building your fanbase, and giving you guys an outlet perhaps not found in XXL or The Source?
Brad Daddy X: We have made a career without any recognition of mainstream press. To my knowledge, Kottonmouth Kings have never been covered in XXL or The Source. It took us years of touring and building the foundation of fans, before High Times recognized our work. Once they did, we have had a ongoing relationship with High Times that has been extremely helpful in spreading the word on Kottonmouth Kings. We were named the High Times’ “Band of the Year” a few years ago and we finally made the cover. That was like winning a Grammy for us, and definitely a career milestone. We really get a lot of exposure through internet sites that cover underground music. We have done some features and were on the cover of Murder Dog last year also, but the strongest exposure we get is word of mouth.
DX: You guys do so much for Hip Hop with the label…Brother J, X-Clan, Swollen Members. After all the years and success, do you ever still think the greater Hip Hop community owes Kottonmouth Kings more respect, even if just looking at the label?
Brad Daddy X: Our respect comes from the fans that have bought our records and our peers; the people validate the music. Because of them, Kottonmouth Kings have sold millions of records without any mainstream exposure. We have done shows and tours with some of the biggest names in Hip Hop music like Snoop Dogg, Cypress Hill, Eminem, Redman & Method Man, Insane Clown Posse, Tech N9ne and Bone Thugs-N-Harmony, and the list goes on and on. We are respected in the area that is most important to us, which is our fans and with other artists. The label is a labor of love. We are in the position to provide a home for some great artists like X-Clan, Swollen Members, La Coka Nostra, Potluck, (Hed)pe, and many more. I don’t think people realize the depth of Suburban Noize as a label, and how we have slowly built a great roster. Our business model from the beginning was to form partnerships with our artists, because I personally have been in some exploitive record contracts in the past. I was signed by Eazy E at Ruthless Records in the ’80s and to Hollywood Records with my old group the Humble Gods. When I started Suburban Noize it was real important to make it a artist-friendly label. I have seen so many human casualties in this business, because it chews artists up and spits them out! I try to create a environment where artists can be empowered and run their own business. We still believe in building artists careers, so if you are looking for the quick easy road to the top, then Suburban Noize would not be for you. If you wanna roll your sleeves up and really grind, while having complete artistic freedom, smoke a boatload of weed and bang some of the hottest pussy on planet earth, then Suburban Noize might be a label for you to look into.

Purchase Music by The Kottonmouth Kings