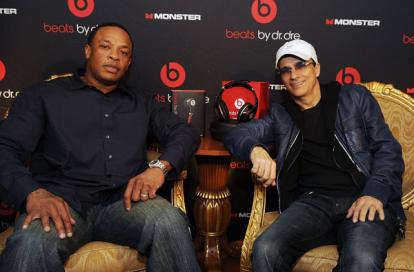 In their latest press stop, Interscope Records President and Chairman Jimmy Iovine and longtime flagship star Dr. Dre stopped by CNBC yesterday, after a Fenway Park stop on Sunday. Iovine, an executive with a heavy-hand in the careers of Tupac Shakur, Dr. Dre, Eminem and 50 Cent spoke about the adaptation going on in the music industry right now. “We’re heading towards a real interactive stage in music, I believe. I think the entire deejay revolution taught us something: that people want to be part of the music and program the music themselves. They don’t want to be told what to play, and most importantly, [told] what to play next.”

Between his line of headphones with Dr. Dre and the success of Interscope artist Lady Gaga, Iovine believes his business formulas have changed with the times. “I believe that with streaming on-demand, some software that we’re building over at Beats [By Dre] which teaches young people how to interact with music and make their own playlist, and [with] some of the things we’re doing with the [cellular] phone companies, I think we have a great future in the record industry. I think seeing the [success] of Lady Gaga shows you that the audience is out there,” said the Los Angeles-based mogul.

Despite sales declines in recent Rap artist projects from 50 Cent and Game, Jimmy Iovine said his company is thriving. “We’re doing very well at Interscope,” who (with subsidiaries A&M and Geffen Records) saw platinum 2009 releases from Lady Gaga, Eminem and The Black Eyes “It’s no longer making one hit song and having 12 attached to it. You need complete albums, complete thoughts.” Jimmy pointed to his Glam Pop sensation, “Lady Gaga is a great example of this.” The man also compared Dr. Dre’s mastery of music to Michael Jordan with basketball and George Lucas with film.

As a follow-up, Dr. Dre, who’s been professionally working in music for almost 30 years, was asked if his formulas have been altered. “It’s pretty much the same for me: I’m just putting my all into what I’m doing. [Making sure] that it’s something I’m going to be proud of, and of course not embarrass myself or anybody that I’m working with,” said the Compton Rap icon.

Lastly, less than 24 hours after revealing the name of his Jay-Z assisted single from Detox, Dr. Dre revealed a timetable for his fans. “Hopefully we’ll be releasing [‘Under Pressure’] in the next two weeks or so. I’m definitely gonna be puttin’ [Detox] out this year. Finally. I think everybody’s gonna be happy with it,” said Dre of the album that’s been nearly a decade in-the-making.