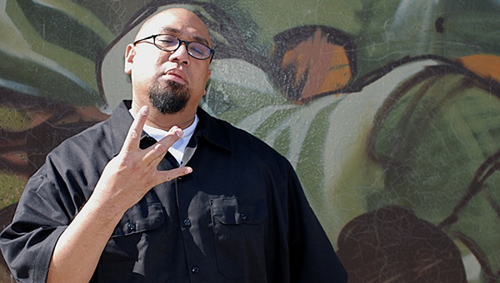 As a member of both The Visionaries and The Beat Junkies, DJ Rhettmatic has been an active core member of the greater Los Angeles Hip Hop community for going on three decades. The award-winning deejay and producer spoke to HipHopDX last week about Ras Kass‘ forthcoming A.D.I.D.A.S. (All Day I Dream About Spittin’) project, which peers the two California native sons for a second time in their careers.

“The crazy thing is, I’ve known Ras [Kass] for at least 15 years,” said Rhettmatic. “That’s my man. Even when we haven’t worked, I was always a big supporter, ’cause he’s a friend of mine. I remember when he got out from being incarcerated, during Caltroit

, when Bishop [Lamont] and Black Milk had a show together and he was there.” Comparing their years building together to more recent times, the Beat Junkie laughed when he revealed, “When we first startin’ hangin’ out, I was a square still. I didn’t drink and smoke, so when he was like, ‘Wait. Hold on. When’d you start drinkin’? When’d you start smokin’?”

Although Ras Kass has reportedly not completed recording the album that shares its name with Jam Master Jay’s favorite sneaker, it is already boasting some powerful arms of support. “In terms of production [on A.D.I.D.A.S.], I’m maybe only doing two or two [beats] on the project. He basically asked me to help him put it together,” said Rhettmatic, who’s produced for LMNO, Aloe Blacc and Prince Po. Joining Rhettmatic behind the boards are The Alchemist, DJ Babu and Mr. Porter. “Really, he got a lot of all-stars on there. Jean Grae, Royce Da 5’9″, Strong Arm Steady, Evidence, Fashawn, Planet Asia,” continued Rhett.

For Ras Kass, a 15-year plus veteran of recording, this project is touching new ears with his trademark densely-researched lyricism. “Even though he’s been around, he’s reintroducing himself to the new generation, so he looks at himself as a new artist now – that just happens to have a legendary past per se,” said Rhett, who will be doing A.D.I.D.A.S.’ sequencing and post-production.

With a known turntablist on board, the producer was asked if the Ras Kass album will reflect a deejay’s sensibilities. “It’ll definitely have a deejay feel. We’re kinda putting it together so it has a mixtape feel, but also an album feel. A little bit of both. Not necessarily will you hear me mixing and blending and stuff, but you’ll hear it to the point it’s like a deejay puts a mix together, it just flows better.”

After A.D.I.D.A.S. releases, the union will likely transition from the studio to the stage. For Ras and Rhett though, truly, this marks a reunion. “When he first came out with Soul On Ice, I actually kinda deejayed a couple shows for him,” revealed Rhettmatic, saying that they performed together as early as 1994.

Initially funded by fans, A.D.I.D.A.S. exceeded its fundraising goals, by double as of today. The album is underway, with planned 2010 release on both CD and vinyl. Pre-orders are already available here.