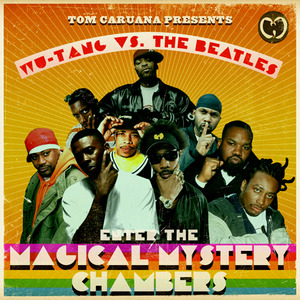 Mash-ups that pin Rap music with other genres and artists have become more popular in the last few years. After Danger Mouse’s Grey Album, a mash-up of The Beatles’ White Album and Jay-Z’s Black Album, more of the mainstream world began to take notice. This intensified with MTV’s Mash-Ups, where Jay-Z and Linkin Park joined forces to mix their work in what would lead to tracks like “Encore/Numb.”

Now, Tom Caruana decided to release his own mash-up project. Inspired by Wu-Tang and The Beatles, this music teacher from England took to work on Wu-Tang Vs. The Beatles: Enter the Magical Mystery Chambers, and released it online. Caruana has already received supportive words from Raekwon and he’s also gotten featured in various media outlets, including Kanye West’s blog. Recently, Caruana spoke with the Los Angeles Times about what inspired him and more.

“One of the tracks that’s on there, ‘R.E.C. Room,’ I made a couple of years ago. I had this easy-listening record of this orchestra playing cover versions of lots of different ’60’s stuff. It had this instrumental version of ‘Girl,’ and the whole thing was just stunning. But I didn’t want to just take a little bit of it. I took the whole song, and sped it up to the right tempo, so it has the complete arrangement and feel of the original Beatles song. Then I made the ‘C.R.E.A.M.’ remix. And then I was like, O.K., I’ve got two tracks now that have Beatles samples with Wu-Tang a cappellas. A few days later I found Ol’ Dirty Bastard talking on YouTube about how he was influenced by the Beatles. And I just thought, ‘This is it.’”

Some of the project can be complicated, but Caruana shared that many samples can be heard throughout.

“‘Uzi (Pinky Ring)’ has got a lot of samples on it. There’s ‘Glass Onion,’ then it went to an Arif Mardin version of ‘Glass Onion,’ then when Ghostface comes in it goes to ‘Getting Better,’ then RZA comes in and it’s a Ramsey Lewis version of ‘Everybody’s Got Something to Hide Except for Me and My Monkey.’ Then Inspectah Deck comes in and it’s a cover version of ‘Hey, Jude.” Then Method Man comes in and that’s ‘While My Guitar Gently Weeps.’ And then GZA’s at the end, and that’s ‘Why Don’t We Do It In the Road.’ I’ve seen on blogs, somebody say something like, I’ve only heard two Beatles samples that I recognized in here. And to me that’s quite a good thing – you have to listen extra hard to hear them. I was purposeful not to take ‘Love Me Do’ and put Wu-Tang with it.”

Downloads and streams can be found at Tea Sea Records.