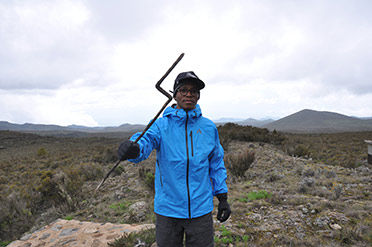 Battling inclement weather conditions, Lupe Fiasco joined several others in climbing Mount Kilimanjaro with Summit on the Summit. The journey, which took about six days and fifty miles, was done in an effort to raise awareness of clean water and how much it is needed in developing nations across the world.

“The thrill of conquering your fears especially in such a physically and mentally taxing environment can’t really be done justice in words,” Lupe Fiasco said in a statement to MTV. (Photos courtesy of Summit on the Summit)
Jessica Biel, Santigold, Kenna and others were part of the trek. The journey will be televised with a documentary set to be shown on MTV on March 14. 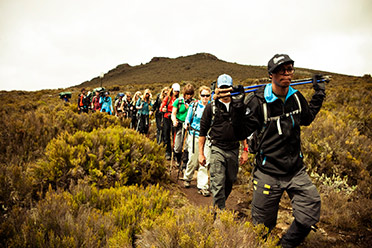 In other news, The Clipse’s former manager Anthony “Geezy” Gonzales has been handed 32 years in jail. The group’s former manager was arrested as he was thought to be the leader of a major drug ring in April of 2009. He faced 82 counts for drug trafficking and the distribution of 100 pounds of cocaine.

“I just want to say that I’m sorry to my family and I’m sorry to the community,” he said during sentencing. Malice and Pusha T have not issued statements on the matter as of yet.

Finally, Noreaga has been talking about the release of War Report sequel.

“We had the idea for the War Report [sequel]. We was actually calling it Report the War. We was gonna do all the songs [from The War Report] in a backwards order. Like call a song ‘Money Blood’ instead of ‘Bloody Money.’ Instead of ‘Illegal Life,’ we would do ‘Life Illegal,’ so on and so forth. It was gonna be everything but backwards. Then what happened was, as we started to record for The War Report 2, I didn’t want to force it. I didn’t want to force calling a record ‘Money Blood’ if it wasn’t that. The shit started flowing. You don’t go to the ocean and say, ‘The waves is flowing this way, but I wanna try to force the waves to go this way.’ You don’t do that. So the way we was recording it, I was like, ‘I can’t mess with Mother Nature.’ It’s flowing perfectly. We went and got Imam Thug, a person from the original. We got Mussolini. Tragedy [Khadafi] is on the album. As you know, he’s incarcerated. But we got a couple of verses, and he’ll appear on the skits. Then we gonna get some new features. I ain’t gonna say who, ’cause it should be a surprise.”

Nore also added that he is more focused on C-N-N than anything else at this point.

“Right now, I’m not even recording Nore records. I got some big-time producers calling with beats, and I tell them, ‘Not right now. I’m chilling.’ I don’t want to record a party record. I don’t even want to be near a party. That’s not what C-N-N represented. It represented the gutter. If the records could be played in a party, then good. But big-up Rae and the whole Ice Water. Mel, K, everybody. We gonna execute the plan.”

He added that Raekwon inspired this release, which will have Busta Rhymes as an executive producer.

“Rae set the platform for everybody to go back in and do their art,” Nore continued, referencing the success of Only Built 4 Cuban Linx…Pt. II. Busta is going back in and doing his E.L.E. [2]. Fat Joe is doing Darkside.  I don’t think I ever been this focused in my whole career. I don’t wanna fuck up the War Report legacy. I’m taking it too serious. I’m taking it real serious, because The War Report has its own following, its own legacy. I don’t want to take anything away from that. I think we’re making a helluva album. Maybe even better than The War Report. I know that’s a lot to say, but wait until you hear it.”

The War Report sequel may be released on April 20.