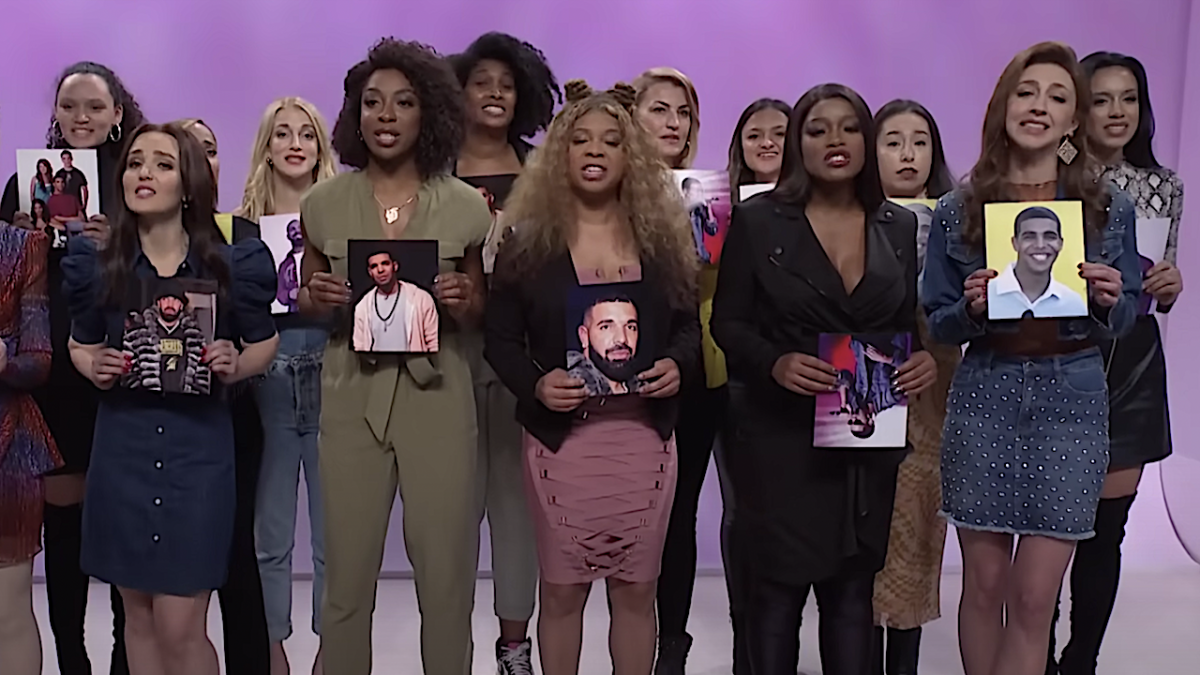 Drake has earned a reputation as a ladies’ man over the years and now his exes have unionized to take action.

In a hilarious skit on Saturday Night Live on (December 4) a plethora of women have had enough of Drake’s antics and have gathered together in solidarity.

“For too long, we have witnessed Aubrey ‘Drake’ Graham write hit after hit about women who have wronged him,” said Chloe Fineman, an SNL cast member on behalf of all his exes. “Only to earn millions of dollars.”

Keke Palmer, who hosted the show, said that the women have officially unionized under the umbrella of “United Tingz of Aubrey” to stand up for their rights from the Toronto rapper.

According to Palmer, Drizzy’s “In My Feelings” almost ruined her life.

“That ‘Kiki do you love me?’ song ruined my damn life,” Palmer joked. “That man had the whole internet asking if I was the Kiki. Well, yes I am the Keke, just not that Kiki. It was my name first. Stop acting like we smashed and give me my damn $6 million.”

Courtney, another one of Drake’s former “love interests,” played by Ego Nwodim said she left Drake a voicemail about a car payment that ended up as an interlude on the rapper’s album.

Although Drake may have lost his battle with “United Tingz of Aubrey,” he recently had his copyright infringement case thrown out.

In her official ruling, Judge Kollar-Kotelly stated that“Way 2 Sexy” did not share enough components with rapper Angelou Skywalker’s “Reach For Skies” to justify a copyright violation.

“The court finds that while Plaintiff does allege ownership of a valid copyright, he does not allege facts to show Defendants’ access to Plaintiff’s song nor substantial similarity,” read Kollar-Kotelly’s decision. “The court grants the defendants’ motion to dismiss the plaintiff’s complaint in its entirety.”

She continued: “The common short words that Plaintiff emphasizes in both his and Defendants’ songs are not protectable elements of his work,” the ruling continued. “They are similar to — and in some instances, more ubiquitous than — other words and phrases that courts have held not to be protectable. Here, common words like ‘sexy,’ ‘yeah,’ ‘kickin’,’ ‘okay,’ ‘action,’ ‘scenes,’ ‘where,’ ‘been,’ ‘today,’ ‘make,’ and ‘hundreds,’ among others that Plaintiff emphasized, are not protectable, nor is a phrase like ‘wa-pow.’”

In his original complaint, the aspiring rapper alleged that Drake had obtained access to his song, “Reach For Skies” after it had been uploaded to the Universal Music Group-owned site Spinnup. Drizzy’s OVO Sound imprint is distributed by Republic Records, which is a UMG subsidiary.