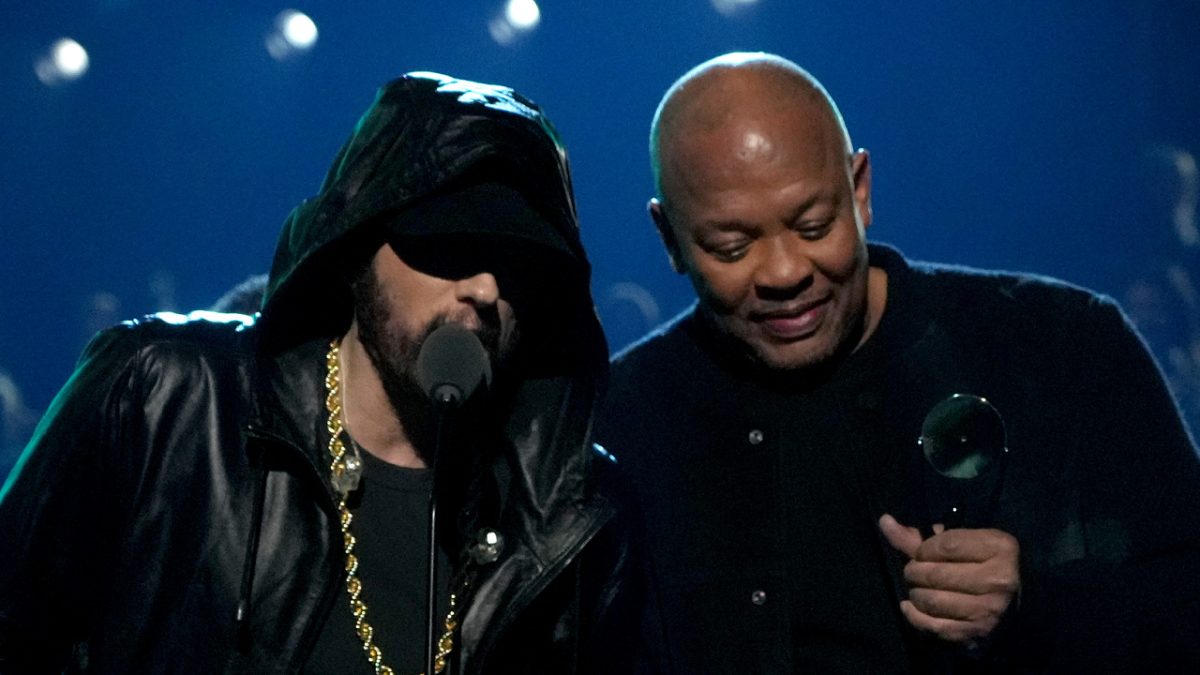 Dr. Dre has welcomed his former protégé Eminem into the Rock & Roll Hall of Fame with a speech that highlighted Em’s impact on the rap game.

The induction ceremony for the Rock Hall’s Class of 2022 was held at the Microsoft Theater on Saturday night (November 5) and also saw Lionel Richie, Terry Lewis and Jimmy Jam, Dolly Parton and Harry Belafonte recognized for their contributions to music.

Dr. Dre revisited the beginning of his relationship with Eminem, including the moment he learned from Interscope Records co-founder Jimmy Iovine that Em was white, which “completely fucked [him] up.”

“Over 20 years ago, Jimmy Iovine, who is also one of tonight’s inductees and one of my best friends, played a demo tape for me from a guy who called himself Eminem,” Dre said. “The first thing I said when I heard it was, ‘What the fuck did he just say?’ I loved it so much that I couldn’t stop listening to it.

“A few days later, Jimmy called me and said, ‘You know he’s a White guy, right?’ Fucked me up!” the Aftermath mogul continued. “Looking back, I don’t know why it didn’t cross my mind. He certainly didn’t sound like a Black rapper, especially because of what he was saying. I guess it was my ignorance at the time, thinking that if you’re a really good rapper, you must be Black.”

After acknowledging how the three of them all bet on each other to bring Em’s career to life, Dre went on to praise Eminem for the way his music “brought Hip Hop to middle America” and “forced us to confront our biases.”

The two then shared the stage to perform a medley of hits including “My Name Is” and “Rap God.” Eminem also brought out Steve Tyler to deliver a live rendition of the Aerosmith sample that appears on “Sing For The Moment.”

Additionally, he recruited Ed Sheeran and Elton John to support him in delivering “Stan,” “Forever” and “Not Afraid,” while also sharing the stage with The Alchemist and Denaun Porter.

Following the energetic performance, Slim Shady returned to the stage for his acceptance speech, during which he humbly told the audience that he was “not supposed to be here tonight.”

“One, I’m a rapper; two, I almost died from an overdose; and three, I really had to fight my way through,” he explained. “I’m a high school drop-out with a Hip Hop education.”

Eminem also took the opportunity to thank a list of close to 100 artists who influenced his career, including LL Cool J and Run-DMC, whose Rock & Roll Hall of Fame induction ceremonies he also participated in.

“They say success has many fathers, and that’s definitely true for me,” Eminem said. “So whatever my impact has been on Hip-Hop music, I never would have or could have done this s–t without some of the groundbreaking artists that I’m about to mention right now.”

The Rock & Roll Hall of Fame 2022 Induction Ceremony is set to air on HBO on November 19. Click here to read Dr. Dre and Eminem’s speeches in full.