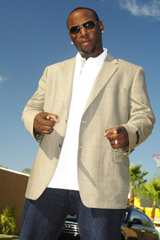 Black Thought and Peedi Crakk rhymed, “There must be something in the water where I come from.” Although perhaps true of Philadelphia, that line certainly suffices in describing Queens, New York. From Run-DMC to LL Cool J, to Nas and 50 Cent the borough that was clowned in Coming To America is serious in retaining Hip Hop’s throne.

Sha Money XL used Queens to navigate his way into the Hip Hop industry that he dreamed of being in. Starting out as an intern for Steve Stoute, watching hometown heroes count money, Sha emulated Mobb Deep‘s Havoc in his production pursuits and started landing placements with Cormega and Onyx.

It was with another local guy, 50 Cent, that Sha Money went from industry to mainstream, in his would-be role in G-Unit. In a comprehensive discussion with HipHopDX, Sha brings the readers along for this journey, and explains why filling the scene with newjacks won’t do, but that today’s hit-makers need to better mentor tomorrow’s. From Queens to becoming a king, Sha Money XL played the cards he was dealt to the fullest.