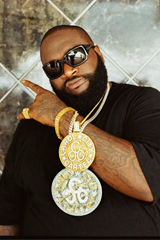 Rick Ross: Who's The Boss?

The boss at Def Jam might be L.A. Reid, but Rick Ross doesn’t know. The patient Miami rapper, deeming himself “The Boss,” waited nearly 10 years to release his debut album Port of Miami. He would wait less than two to follow up with Trilla.

In older times, Rick Ross might still be working his previous works to multi-platinum status and fifth or sixth singles. In today’s cutthroat climate, Ross has to contend with Young Jeezy, T.I. and The Clipse for the crown of “dope boy rap,” and a strong connection with the youth.

During a brief conversation with HipHopDX, Ross explains the challenges of a fast transition, what Michael Jackson means to him and a unique, street-embedded friendship with D-12‘s Bizarre. When you get to Miami, Rick Ross says he already knows you’re there. Nearly 20 years after Luke‘s 2 Live Crew, some rap fans had no idea that Miami mattered till it knew Ross was there.

HipHopDX: What correlation do you see between your album and Michael Jackson