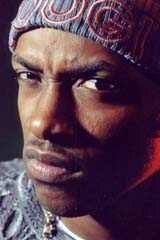 Mystikal wants you to know Tarantula, his latest release, is so named because, like the spider, he is black and dangerous. However, these aren’t the only arachnid-esque traits the prolific emcee embodies. The Kung Fu flick loving rhyme slinger couldn’t be more active if he had eight legs.

In a former life, as deejay and break-dancer, he once went by different names, including Mystikal Mike, MC Serious, and Mike T. Today, the 31 year old New Orleans native is a recording artist, philanthropist, businessman, and father. For Mystikal, although responsibilities continue to expand and diversify, one constant remains, keeping his web connected: his love of music.

Before Mystikal’s success in the music industry, a four year stint in the Army polished off his youth, or, in his words, “That’s when I got my hair put on my chest.” That experience served him well enough to get Mystikal to spontaneously offer the hook off the Army’s commercial theme, “Be All That You Can Be.” The Army undoubtedly served to enrich Mystikal’s political consciousness. As a recording artist, he used his music as an outlet to express his perspective on the September 11th tragedies on the uplifting track off Tarantula, “Bouncin’ Back (Bumpin’ Me Againt The Wall).”

In a different direction, “Big Truck Driver” is a purely fun ode to all his trucks that he must really enjoy, since he’s planning to name his own soon to be record label Big Truck Records. Having been on three different labels, Mystikal definitely has the knowledge necessary with such a venture. After the changes he’s seen, Mystikal affirms, “I learned that I’m never gonna compromise nothin’ that’s gonna hurt my career.” Specifically on the subject of his relationship with Master P, Mystikal says, “Put it like this. We respect each other.”

A self-proclaimed perfectionist, Mystikal finds working on soundtracks as gratifying as completing his albums. The soundtrack to the coming film, “The New Guy,” starring Eddie Griffin, will include a track Mystikal likes