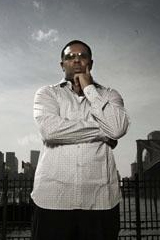 C.L. Smooth: The Rebirth Of Cool

C.L. Smooth was one of the most influential MC’s to grace our ear drums from the early to mid 90’s, but following a debut EP and two classic LP’s, he disappeared. After a ten year hiatus from the Hip-Hop scene, he’s returned with that distinctive voice and sounding just as polished as ever. This truly is the return of the Mecca.

The year is 1992, the album, Mecca and the Soul Brother. An unforgettable horn sample starts off one of the greatest Hip-Hop songs of all time, They Reminisce Over You (T.R.O.Y). Even when that song is played in this age of iced out, Bentley driving, getting money Hip-Hop, it still has a major effect on those who first heard it back in 1992 and for the younger generation that is hearing it now, for the first time. The people behind such a song, none other than Pete Rock and C.L. Smooth.

Pete Rock and C.L. Smooth were the epitome of what a DJ/producer and an MC should sound like, and be like. If RUN DMC started the blueprint for the MC/DJ act, back in the 80’s, then Pete Rock and C.L. took it as their own in the 90’s as they molded it into something that most hip-hop tandems haven’t been able to duplicate in their own careers. Since their last studio album together, The Main Ingredient back in 1994, C.L. has been relatively quiet throughout the Hip-Hop world, while Pete Rock has maintained a steady pace making his rounds, still crafting head banging beats for hip-hops’ elite, and putting out his own compilation albums.

On the last Pete Rock compilation album, Soul Survivor 2,, released back in 2004 we were entertained by some of the most talented and gifted lyricists’ that the game has to offer. The Carmel King lent his vocals on a few tracks, and for some brief moments, we were taken back to a golden era in Hip-Hop and experienced the chemistry that the pair initially shared and that made them trend setters for the genre. Most importantly though, we heard that unmistakable voice and smooth delivery of the Mecca Don himself. It seemed like his trademark flow was frozen in time and waiting to be thawed out at the right moment, and there is no better time then the present. With his first studio album in over ten years, American Me I had a chance to talk with C.L. Smooth as he discusses the direction in which Hip-hop is headed, the break up of himself and Pete Rock and plenty more.

During the making of this album, did you feel any added pressure to try and introduce yourself to a younger hip-hop audience that might not be that familiar with your previous work?

No, no not really I don’t think I would have come back if that was one of the pressures I would have had. I just wanted to be comfortable and be sure that I would maximize my potential and do what needs to be done at being successful at making music and having people enjoy it.

How do you feel about the current state of Hip-Hop? Do you feel like its moving in a positive direction?

I think its moving in a good direction cause there’s a lot more opportunities out there to do the positive things with your music. Then when I first started so you know I think that it’s positive you what I mean overall I think some of the talent is lacking now or watered down because you have everybody trying to make music now but you know as far as growth the whole genre of music has grown.

It seems that New York has lost a little bit of its swagger as of late, with the emergence of the south and Midwest. Why do you think the spot light has gotten away from hip-hops