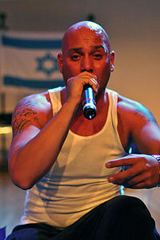 JoJo Pellegrino used to be down with Violator, until the day he saw Bubba Sparxxx posters on the office walls, yet remained frustrated by the lack of attention his own release had received for the last two years. HHDX caught up with JoJo in Little Italy to dine & discuss his dreams of making dough as an independent and living in a world where White rappers got along.

Are you still signed to Violator?

I’m not associated with Violator in any way. That wasn’t the place for me to be. It took a while to get out but I’m completely out of the Sony system. I’ve been away from them for about 2 years — 100%.

Were you signed to Violator management?

I was signed through Violator Records that was distributed through Loud. So throughout all the miscommunications with Loud Records folding and everything, I got pissed off and I didn’t know what was going on. I felt like I deserved more communication and more records released. I wanted out so I got out.

Did you ever release a record?

They never properly released “Fogedaboudid” which was where the beef started. My beef. Like I-don’t-want-to-be-here type of beef. I was like these dudes don’t put records out the right way. Because “Fogedaboudid” deserved it. It was the first season of The Sopranos. I had James Gandolfini, Pauly Walnuts and Hugh Grant dedicated to show up to the video shoot. They never shot the video. They said you need a certain amount of spins and when I looked at the spins, my number was well over that amount. It was problems from day one. They should have told me we’re not looking to put out a JoJo record. We’re looking to sign you and hold you for two years. They weren’t being honest. By the time I started seeing Bubba Sparxxx posters hanging up around the Violator office, I was like I’m out of here.

Every day of my life since I’ve been making music. For myself. I’ve been sitting back and watching what this business is about. Watching other entrepreneurs coming up. There were a lot of changes in my career. My production company, which was Great World, we split. No bad terms. I had other management and these guys were making great moves and then got incarcerated. So I’ve been making music for myself, staying out of trouble and not stressing this game. I know once I approach it the right way, the records are there. I’ll be OK. I’m doing the independent thing. I really want to make $7.25 off of each CD. I’m not worried about being a huge star. That will come. I’ll build up the finances and I’ll make it happen on my own. That’s my goal these days. I have my new team called Mental Instruments. I started my own label called Pellevision. And we’re going to start making moves, fund the album and videos myself, with my partner. The distribution companies are already hollering because I got a little name for myself and I got the money. It’s a no-brainer for them.

What are some of the lessons you’ve learned along the way?

The most important thing is always do what’s in your heart. Don’t make music how someone else tells you to make music. That doesn’t mean don’t take advice. Don’t believe everything you see or read. It’s all a major game. But you control your own destiny.

I look at some of these people that people like myself or other artists are looking for love from — these big execs — and what are they doing that I can’t do? I do this for music, not for money. There’s been plenty of times when I’ve sacrificed everything I had for music. I look at these other people in the game “Rawkus Records” these people really popped it off. Steve Rifkind. What makes him mentally on so much of a larger level than I could be on? Look at all these dudes that are owning their own labels, Jim Jones. Why can Jim Jones do it and not JoJo Pellegrino?

You said before that Eminem should have signed you three years ago.

I’m no one to say how he should do his business. The kid knows I exist. There seems to be these things with white rappers, they seem to all hate each other. Because they’re all fighting over who’s black and who’s not. I’m blacker than you are. I’m not like that. I already know for a fact these other rappers haven’t seen or been around the shit I’ve been around. Which doesn’t make me a gangsta or a killer or Black. I don’t walk around fighting with white rappers over who’s blacker. Eminem told me I was dope and he wanted to work with me. Paul Rosenberg and his peoples have extended his arm out to me a couple of times with love. But I was dealing with Violator at the time. And I appreciate that love. But if Eminem doesn’t nip something like this in the bud, and I’m not threatening Eminem. He’s untouchable. But his credibility is going to be in the red zone in a minute. I’m going all out for mine. I would love to work with him. But if not, I will be a problem for that kid in the near future.