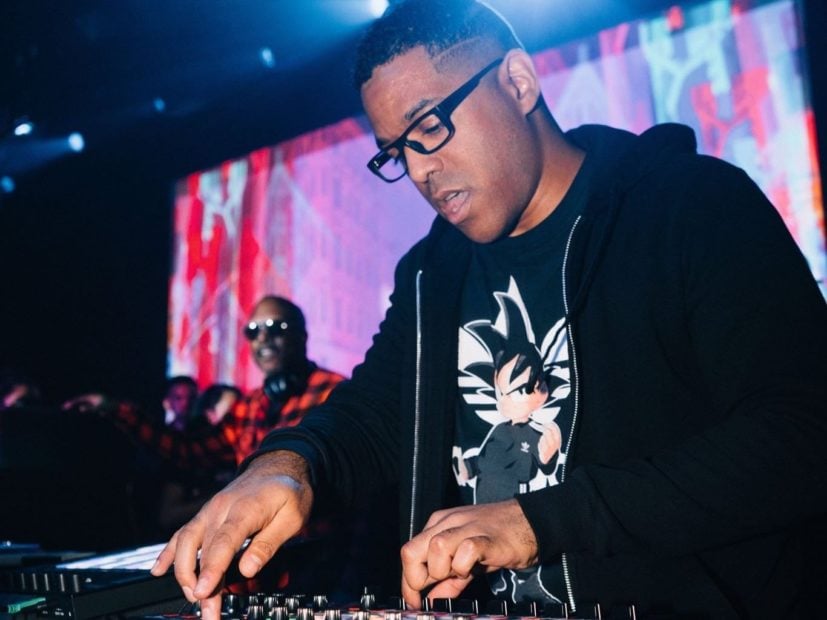 Stro “The 89th Key” Elliot has been paying his dues for over two decades. As a former member of The Procussions, he rhymed, produced and b-boyed his way into a seat on The Tonight Show Starring Jimmy Fallon as a member of The Roots. Simply put — he got an offer from Questlove he couldn’t refuse.

At the time, Stro was based in Los Angeles, so he packed up and made the arduous cross-country trek to New York City where he’s been living since July 2017.

“it was a pretty big change,” he tells HipHopDX. “I lived in L.A. for about 15 years. When I got the call from Amir [Questlove], it was funny. Amongst a bunch of other questions he had, he asked me how I felt about leaving Los Angeles and it took a while for it to click for me. I was like, ‘Well, what do you mean? Why would I have to … Oh.’

“It didn’t stop me from saying yes, you know, just because I’m a person that’s always going to live my life with trying out new experiences.”

Ironically, New York City was a place he said he’d never live in and he had no interest in television. But as fate would have it, Stro is currently on NBC five times a week and living in the Big Apple.

“It was an opportunity to play with one of my favorite and one of the greatest bands of all time on a consistent basis,” he explains. “I figured I can probably get used to living in New York and dealing with the television side of things.

“To be honest, it’s been really great. I feel like without knowing it, it was kind of time for a change of scenery. I grew up a military brat so me being in one place for 15 years, my body was probably like, ‘Yo, what’s happening?’”

I’ve posted and reposted this Funky Drummer routine a dozen times. This will probably be the last. It’s gets no better than 1) doing a live rendition of Rebel without a pause. 2) going into a he’s the DJ (we’ll kinda) I’m the rapper routine with the legend Chuck D. Too many moments to count this week. This ones up there…wherever there is. @mrchuckd_pe @theroots @blackthought @questlove @kirklloyd @jamespoyser @rayangry @kamalgray @tubagoodingjr #rootsgrammyjamsession ?: @trackstarthedj

Now firmly settled in his role, Stro has a life most people only dream of having. On October 31, Beastie Boys’ Mike D, King Ad-Rock and Mix Master Mike appeared on The Tonight Show in support of their new memoir, Beastie Boys Book. There was Stro, playing alongside Black Thought, Mix Master Mike and the rest of The Roots.

“It was a lot of fun,” he says. “The great thing about that job and those guys, Amir quite specifically will open up any opportunity to do something different or something cool. Knowing my skillset and knowing what Mike was going to bring, it was definitely his idea to be like, ‘Well why don’t you guys sort of do like a trade off?’ We usually play a little song. He said, ‘Rather than just have him [MMM] cut over us playing, this should be something between you guys.’ From the jump, Mike was like, ‘Yeah, yeah. Let’s do that.'”

Mix Master Mike was a little hesitant about a few of Fallon’s requests. Apparently, Fallon used to love an old routine Mike did back in the day involving Rush’s 1981 classic, “Tom Sawyer.” But either Mike couldn’t remember it or didn’t want to resurrect it.

“Jimmy was really excited about his Rush routine that he used to do,” he says. “Mike seemed to have no interest in wanting to do it for some reason, to the point where it was almost getting awkward. He was like, ‘Yeah, you know it was like my favorite thing ever.’ Mike was just kind of like, ‘Yeah, it was cool.'”

But Stro insists Fallon’s wide-eyed enthusiasm is nothing but genuine. Anyone familiar with Fallon’s style knows what a dedicated Hip Hop fan he is.

“That’s the great thing about Jimmy is that Jimmy is a huge music fan,” he says. “People would tend to think like, ‘Oh my God. He’s just really egging it on and really hamming it up.’ No, he was really, really excited to have them — and especially Mix Master Mike — on the show at the same time, just to pretty much be able to geek out. I don’t know if you went to the YouTube side of it, but the interview ran way longer than what was televised.”

Some of Stro’s earliest Hip Hop memories involve the Beasties, which were stirred up as Fallon was chatting with Mr. Diamond and Ad-Rock.

“While they were talking, I remember thinking some of my earliest memories of being introduced to Hip Hop, they were definitely involved in,” he says. “I had a cousin who was the biggest jerk to me when I was young, and he literally made me — I had a little bitty allowance —  pay him just to dub songs from him. ‘Paul Revere’ from License to Ill was one of them.”

When Stro isn’t playing with The Roots, he can often be found alongside DJ Jazzy Jeff, an important mentor of his. In fact, Stro met Questlove at one of Jazzy Jeff’s Playlist retreats. The Roots drummer had gone to Maryland to specifically catch Stro in action.

“I was like, ‘What are you [Questlove] doing here? I didn’t realize you were going to be here,'” he recalls. “He’s like, ‘Oh, they told me that you guys were going to be here, so I said I had to come.’ I was like, ‘What have you, how, why, what have you heard? [laughs] He was like, ‘Dude. I play all of your guys’ stuff at my DJ sets like constantly. You guys are like legends amongst the circle of us DJs and whatnot,’ which would kind of become the common thing over that week.

“Between him and [DJ] Scratch, Young Guru and all these incredible DJs and amazing people, there was this really crazy moment where at least half of them — if not most of them — figured out like, ‘Oh, you’re that guy. No, I know who you are. I have your stuff,’ which was really crazy.”

Quest and Stro’s relationship continued through email — and not without Jazzy Jeff’s blessing.

“Up until that point, I had been doing a lot of work with Jeff and we had all these plans to do this touring and all this stuff,” he explains. “I’m a pretty loyal person, so for me, he was the first person that I hit up. I was like, ‘Jeff, look man. I just got off the phone with Amir. I feel like he just offered me a job.’ Jeff was kind of like, ‘What, as a Root?’ I was like, ‘Yeah.’

“In my brain, I was trying to probe him to see like, ‘Okay is this a good idea? Is this a bad idea? What do you think?’ My loyalty was as such to Jeff is that if Jeff would have told me not to take the gig, I wouldn’t have taken it.”

But Jazzy Jeff approached the situation with nothing but grace and unknowingly (or perhaps knowingly) played an integral role in Stro taking the job.

“He was like, ‘Look man, I can’t make that decision for you. This is about you. This is about your future and what you want to do and your personal growth. You know, there’s a lot of pros, but determining what the cons are is all dependent on what you kind of want, you know?’ He’s like, ‘The only thing I can tell you are the things that I know. It’s a job. You’re expected to be at Fallon for four or five days a week, however often they shoot, and then The Roots have their gigs on the weekends and any other time that they’re free.’

“In his own little way, he was saying, ‘Don’t worry about me.’ He’s like, ‘The one plus about it is that you’ll be closer to me. You’re a train ride away as opposed to being in L.A.’ That was good. All of that kind of helped in knowing that if I go out to the East Coast — besides this job and this new city and this place that I’ve never lived — I will have some people at least a train ride away if everything seems to get too hectic. I’ll be able to sort of run away to and kind of refresh if you will. That was great. That was definitely a big part of me accepting the gig.”