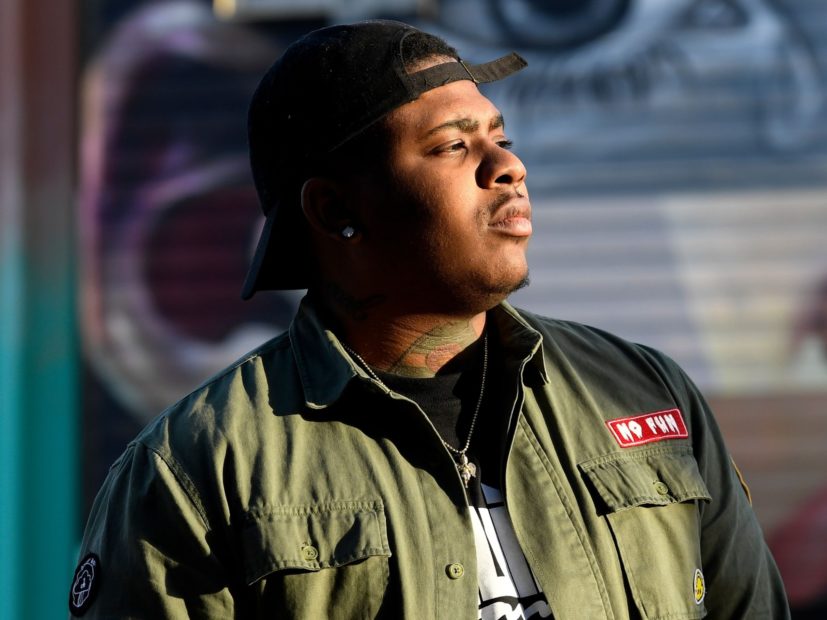 Trev Rich didn’t know he was going to wind up on the Spider-Man: Into the Spider-Verse soundtrack — but he did. While out in Los Angeles, the Denver-based artist was invited to several recording sessions where he soon found himself in the company of Grammy-nominated producers working on something big.

But there was one problem. On his way to the one of the sessions, Trev left his wallet in an Uber. He was almost ready to turn around and head back to Denver, but Matt McNeal – an A&R from Dreamville Records — convinced him to stay.

“He [McNeal] was like, ‘Man I just think you should stay,” Trev explains to HipHopDX. “We got a session tomorrow. I think it’ll be a dope session.’ He was like, ‘Just pull up.’ I get in the whip, get to the session and I’m in there with [DJ] Khalil. He’s like, ‘I been trying to work on this record. I been trying to work with a bunch of different writers to get this hook and I can’t get the hook.’

That was that. As fate would have it, Trev ended up on DJ Khalil’s “Elevate” alongside Denzel Curry, YBN Cordae and SwaVay. The title of the song and the fact it ended up on Spider-Verse is eerily prophetic.

“That’s exactly what’s going on with me right now, which is crazy because I didn’t think about it like that,” he says. “I got to watch the trailer and after I watched it, I’m like, ‘Yo, this is crazy!’ Because I’m kind of going through the same thing this kid [in the movie] is going through.”

Fans of Trev Rich might take notice the name on “Elevate” isn’t credited to his stage moniker. It’s actually under Trevor Rich, his publishing name. Trev is focused on throwing himself into songwriting and embarking on this new chapter.

“I think I got addicted to this now, again,” he says. “Being in a writing pocket and being in an artist pocket are two totally different things. I don’t have boundaries when I’m doing songwriting. I can do anything. I can say anything. It doesn’t necessarily have to be for me when you do songwriting. My goal in 2019 is to find that balance. Find the balance between being a songwriter and being an artist.”

Since returning to Denver from Los Angeles, Trev has thrown himself into the studio.

“I’m really in a secluded area,” he says. “Nobody’s really up there when I’m outside. Nobody knows me. It’s a pretty cool place to be. I can just get my mind right to record because I didn’t have any distractions in L.A., which is why I feel like I succeeded. I had to put myself in that same boat now that I’m back home, which is very hard because you’re home. My family’s here. I got friends here. I got a lotta things going on here.

“Being able to go to that studio an hour from my house, I can just sit there. I’ll get to record and I don’t have to worry about time. I can really just relax and make some things happen. And now, there’s people talking about pub situations. I don’t know. I really don’t know. I feel like the sky’s the limit honestly for 2019, but I just wanted to end 2018 with a bang so we could get 2019 off on a good start.”

Trev’s background is already seeped in glory. He was briefly signed to Cash Money Records, spent time on the road with Joe Budden and actually lived with the Slaughterhouse vet for a period of time. Looking back, he realizes that time with Budden really pushed him to become a better artist overall.

“I feel like that helped me a lot because prior to that situation I just had a bunch of dudes like, ‘Yeah you’re dope, yeah you’re dope.’ You know, like the close people to me have always been honest about my music. But it’s like now, I have somebody who been in this game, who done it, and he was like, ‘That’s trash’ and I’m like, ‘Ah! I gotta come with it.”

Despite the valuable lessons Trev was learning working with Budden, he knew he had to leave.

“It was really pride,” he admits. “In the time while I was out there with Joe, we didn’t have jobs. We didn’t have income coming in. So we really had to depend on Joe. It was multiple artists in the house who had to depend on this one person. I got to a point where I’m like, ‘Yo, I can’t depend on another man to eat food during the day’ so I ended up going back to Denver.

“But I still had the buzz with Joe. We was on the same team. He would take me on tours and stuff. It wasn’t really like me leaving Joe. I was just leaving the living situation because it was in the process of me becoming a man.”

#Clarity out now! If you got it drop them ???’s and tag somebody who needs to hear it!

Trev’s journey into publishing doesn’t mean the end of Trev Rich — not by any stretch of the imagination. He’s simply embracing new opportunities.

“Between the songwriting and between the artistry, I know I’m gonna be back on the stage some time soon,” he says. “I understand that. I have the artist Trev Rich. But right now, songwriting is really what I’m gearing up for.”

At 29 years old, Trev is really just getting started. He turns 30 on May 28 and will undoubtedly be rocking a mic somewhere.