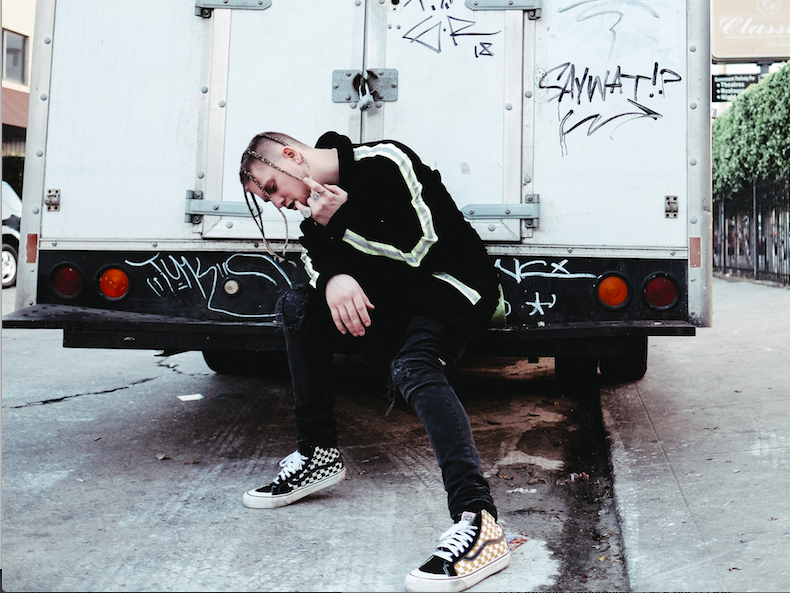 Jordan Hollywood has dropped his first project as a Quality Control artist, FINALLY!. The 13-track effort boasts production from SkipOnDaBeat, Smash David, and Hitmaka, with features from Lil Baby and Ronny J.

Complete with his agglomeration of talents—he raps, sings, song-writes, produces, audio engineers and creative directs his videos—Jordan Hollywood is one of the newest additions to the famed QC roster. The 25-year-old Broward County native began honing his skills right before his mother supported his decision to drop out of school at age 12, when he stepped in the studio and never looked back. HipHopDX sat down with the Wasted Youth collective founder to celebrate the release of FINALLY!,  reflect on his start in music, and discuss future visions.

HipHopDX: You’re from Florida, where many of the new wave of Hip Hop artists are from.

Jordan Hollywood: Yeah. And I’m never going to leave. Forever. I go to Atlanta a lot because of QC, but I’m never leaving Florida.

DX: Where did the name “Hollywood” come from?

JH: I’m so not “Hollywood.” But, when I used to play football, I had long-ass blonde hair and I was always clean, wanted to stay clean. I played corner and got mad interceptions, but wasn’t trying to get dirty or anything. So they would call me “Hollywood.” I thought of changing my name so many times, cuz when you think “Hollywood,” you think someone bougie, stuck up, someone who won’t pick up the phone. That’s not me. But the name just stuck.

DX: How long have you been with QC? How did you start working with them?

JH: About a year now. A lot of people go to wherever they can sign, but with me, every move is strategic. I knew they were the right ones to partner up with, so I made it happen. We didn’t take our first offer—hell no. We had a bunch of offers from other labels. But just being in Atlanta, you feel the QC presence. There’s nowhere else I wanted to go. My road manager and I—I never go anywhere without him, that’s my right hand man—everywhere we’d go, I’d be like, “Bruh, why are we meeting these people? I only want to be with QC.” Not even Coach [K] and Pee know how hard we went. But, when I want something, I get it.

DX: What drew you to the label? Was it Migos’ success?

JH: Migos are dope but it’s more Coach [K] and Pee. Those are my role models. They’re dope. They’re just so authentic, the way they take care of their people is so inspiring. Me being an artist and a manager, I want my artist and my producer and my team to treat me a certain way, like family. Just the relationship they have with each other, I love it. No snake shit. All about loyalty over here.

DX: Yeah, they keep it in the family. I saw you just dropped a single off your EP, “Let Me Find Out,” with Lil Baby. Are there other features on the project?

JH: Coach and Pee didn’t want me doing no features, they think my talent speaks for itself. But I really wanted to do a song with someone from the label. And Lil Baby was the most organic, I was around years ago when he had no songs. It’s been lit seeing him go from when he first became an artist, to where he is now. Then I have Ronny J on there. He’s known for being a producer, but I got a long-ass verse of him singing on my track.  It’s my favorite verse he’s ever done. Everyone wants his beats, but when we link, we link on the artist tip.

DX: Yeah, Ronny’s from Florida too, so you’ve known each other a while?

JH: We’ve known each other since before either of us had anything going on. Years. I like to work with people I have relationships with.

DX: You have other things in the works with QC artists?

DX: Outside of the label, dream collaborator?

JH: Lil Wayne is my favorite rapper of all time. [My] dream collaborator is The Weeknd though. I promise it’s gunna happen. I get so inspired off his shit. He’s so talented.

DX: What’s the theme of FINALLY!? Or is it just a collection of records?

JH: Yeah, the theme is “finally,” like finally this is out, it’s a celebration. It’s a little bit rubbing in people’s faces, it’s excitement. Balloons, naked girls, clowns, laughing. That’s how I’m feeling.

DX: Makes sense. So, you mentioned you also manage and sign talent yourself?

JH: Yeah, The Wasted Youth is my record label/ management company. I started it about two years ago. I named it that because I feel like I wasted my youth trying make this music shit happen. So that’s what it is.

DX: Who do you manage? How did that relationship start?

JH: Skippa [SkipOnDaBeat], my producer. Everything I do is strategic, like I said. So Broward, our city, is the hottest for up-and-coming music. You know, Kodak and all those guys. So I was thinking, “Who makes Kodak’s beats?” I found out it was this guy, Skippa. I was like, “He’s not signed? I’ll sign him.” Now, me and Smash David represent him together. They [Skippa and Smash David] made G-Eazy’s “1942”. He’s got sauce. I think it just went Gold—that will be my first plaque as a manager. I also have an artist named IV, she’s incredible. She’s like a female version of me, but she sings. Before the year’s over, she’s gunna be sitting right here, getting interviewed too. She’s next.

DX: A lot of label owners hand off the managing to other staff as they develop their own artistry. In five years, do you see yourself continuing to manage artists, or just making music, or both?

JH: Definitely both – I’ve been managing artists for about 2 years. So both, we’re doing that right now and we’re killing it.

DX: Yeah, I noticed you have your hands in a lot of aspects. Even audio engineering your own stuff. Why don’t you have someone else do that?

JH: Since I’m always in the studio, I was just thinking, I can wait for someone to come record me, or I can just fucking learn. A little time, a little youTube, I taught myself. I didn’t want to wait around and depend on anyone. So I can produce, write, engineer, come up with my own videos.

DX: Got it. How about the song writing? You used to almost exclusively write, and now you don’t do it as much. I saw Jason Derulo is the first major artist you wrote for, how did you break into that?

JH: I met him through a mutual acquaintance, Frank Harris. Derulo’s from Broward County too. He was the first one to invite me to L.A., first one who told me I’m a real writer. I never wanted to be a songwriter, but it was natural to me. I came to L.A., wrote some songs, and people heard I was good. It took off quickly, I was writing for mad people, but I wasn’t really happy just writing. The artistry is more important to me now. It was taking away from the artistry, cuz I was so focused on making sure everyone else was lit, and I was doing a lot of writing, but not really getting paid. Now I gotta be a fan of you to write for you. Not all money is good money now. I don’t chase bags no more. I chase greatness and happiness.

DX: I’m sure in the beginning it was different—you’ve been making music since you were 12? How did you first find yourself in the studio?

JH: Yeah, 12. The person I used to buy weed from—he took me to the studio, and I walked in and was thinking, “Holy shit.” It wasn’t even the nicest studio, but I was like, “What the fuck. Wow. I love this.” At first I started skipping school to go to the studio, then I told my mom and she signed me out, let me quit school for music. Then I really got in the industry at 15. That’s when I got my first radio play. From then, that’s when I knew I was supposed to make it.

DX: That’s nice that she was supportive from the start. How does she feel now? Is she happy?

JH: Cardi. I like Nicki too, she’s fire, but I gotta go with Cardi. Cardi’s new, she’s fresh. Nicki had her run. Just like Lil Wayne had his run, it’s Drake’s turn now. Lil Wayne’s still my favorite though.

JH: Stay down ’till you come up.