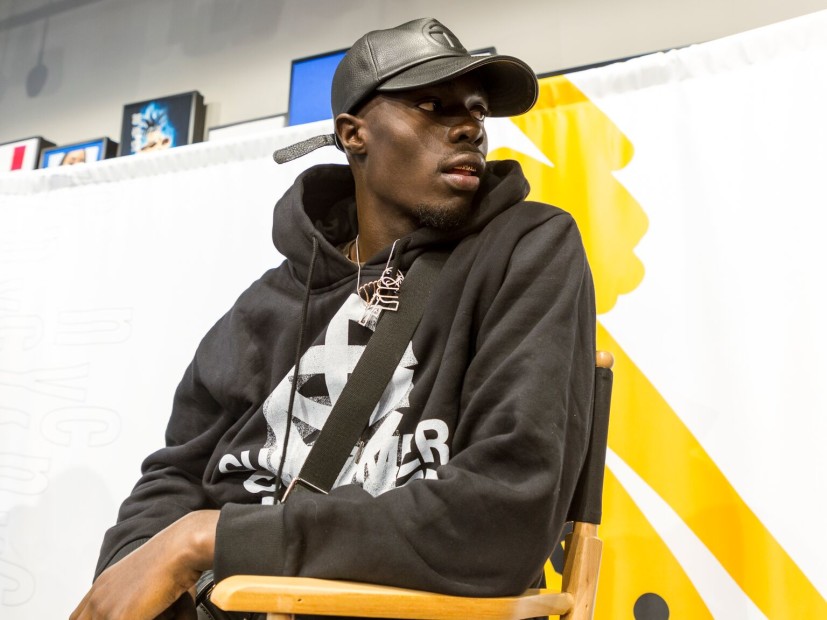 Sheck Wes hosted an intimate live Q&A and meet-and-greet at Footaction off W 125th Street and Frederick Douglass Boulevard on Saturday (Sept. 8), celebrating his involvement in Footaction’s No One Way campaign, a platform for individuality and style.

Wes, 19, was asked by Footaction to curate a lookbook for back to school, with the lookbook products made available on Footaction.com and selected Footaction stores. Inspired by the next generation of creators pushing culture forward, No One Way is a “determination to create your own path, set the trend, and constantly and relentlessly evolve.” Wes is the visionary representing New York. Others tapped to bring No One Way to life include LVRN (Atlanta), Cary Fagan (Houston), and Theo Martins (Los Angeles).

“It’s just what I represent,” Wes tells HipHopDX about No One Way. “I’ve always been someone whose been way outside the box, and [think] way different than what everybody else is doing.”

The lookbook was photographed by Cian Moore. It features images taken from Harlem on Lenox Avenue, the rapper/model/designer playing soccer, and concert shots from Playboi Carti’s Die Lit Tour stop at Terminal 5 in Manhattan last August, where Sheck famously rode a Citi Bike to the venue.

In several photos, he’s wearing a Wu-Wear graphic tee, noting to DX that he’s a big fan of the Staten Island crew.

“Wu-Tang is one of my biggest inspirations. ODB is one of my favorite artists of all time,” he said. “I just feel like their charisma and their No One Way of doing things, how they came to the rap game, it is so different.”

Sheck is having a moment right now. Fresh off performing at Made in America festival in Philadelphia and rocking the stage with Travis Scott in Toronto for one of Drake’s shows, his biggest single “Mo Bamba” has entered the Billboard Hot 100 at No. 82. The song also debuted onto the Hot R&B/Hip Hop Songs chart at No. 33.

“I’m honestly just proud of this dude,” said Orlando Magic center Mohamed Bamba, who was also in attendance. “He has his handprint all over the game and in entertainment. And that’s what makes him special.”

Hip-hop fans are enjoying the intensity that Sheck brings to his live shows. Songs like “Mo Bamba,” “Live SheckWes, Die SheckWes,” and his newly released single “Chippi Chippi” are all mosh-pit starters. It doesn’t matter if you’re old or young, Sheck will always promise that “no matter where, the energy will never change.”

That commit to artistry is something listeners saw in Mac Miller, the 26-year-old Pittsburgh phenom who died of an apparent drug overdose on Friday at his home in the San Fernando Valley in California. When asked if Sheck was a fan of Mac Miller, he says he memorized a lot of his songs as a kid.

“I can’t sit here and say I’m a big Mac Miller fan. But I loved what he did, and respected what he did,” he said. “His energy, what he brought around everybody else. It’s sad and it’s real tragic. You know, a lot of people don’t know what artists really go through and they forget that artists are human too. That be a big reason why people relate to artists. My condolences to his family.”

The likes of Drake, Chance the Rapper, Post Malone, J. Cole, YG, Lil B, Snoop Dogg, and many more paid tribute to Mac on social media. Ariana Grande, who dated Mac for nearly two years, posted a touching photo of them together without a caption. His impact in the music industry spoke volumes to his work in being supportive to his peers who wanted to collaborate and make music with him.

“He brought a little bit of diversity,” Sheck said. “He’s accepted by everybody as well. He’s the second coming of a lot of people—like Eminem. He was one of those people that kept our whole game diverse. Rest in peace, Mac Miller. I think that was one of Travis’ good friends. He probably really hurt by it as well.”

Local label Nightfall Records is planning to host a vigil for Mac Miller at Frick Park, a section of Blue Slide Park, in Pittsburgh, on Sept. 11.

Sheck, who is signed to Travis’ Cactus Jack label, Kanye West’s G.O.O.D. Music, and Interscope, will continue to build his following as he prepares for the release of his debut project, Mudboy.

“It’s going to be a real emotional roller coaster,” he stated back in July. “I make music for anything, niggas can run to this shit or cry to it, it don’t matter. It’s gonna have all of the crazy shit, all the chill shit, shit where I’m telling my story.

Keep up on Sheck Wes by following him on Instagram @sheckwes.