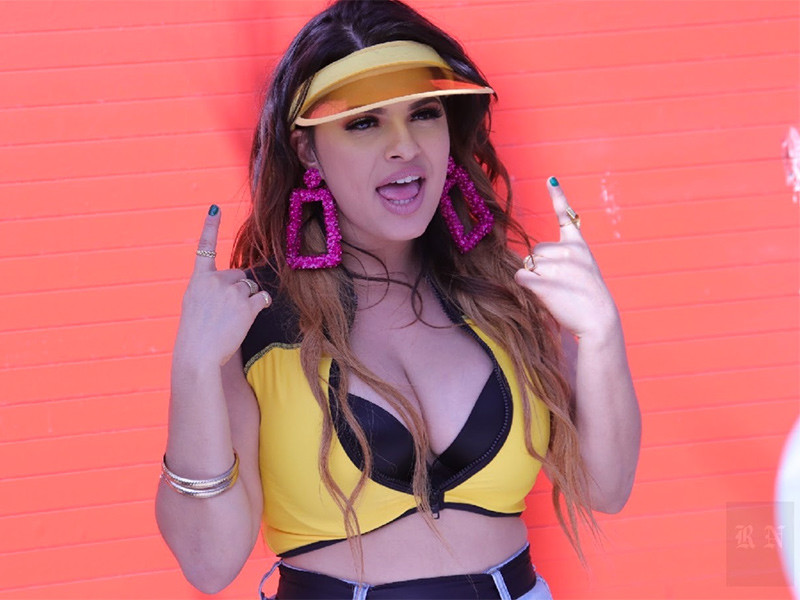 Watch Melymel strut through the streets of Gualey in her new music video for “IDGAF” and you’ll notice a few things in the single extended shot: a lively community, a team of Hip Hop dancers contorting with blistering choreography, and above all, a carefree confidence from the woman with bright green hair leading the camera through the action.

An intro scene describes Gualey as “one of the most dangerous neighborhoods in the Dominican Republic,” but you wouldn’t know it from the locals’ joyous applause at the end of the video, who eagerly lined the streets to be a part of Melymel’s vision.

“My godson’s father is from this hood, so I’ve basically been going since I was 14,” she said. “Wasn’t born there, but it’s like I’m from there, I go every day and chill with them. It was like, ‘Why have I not shot a video in this hood?’ They claim me more than guys that are born and raised here.”

Melymel was born in Santo Domingo, and had to seek out many of her musical influences for herself. In addition to the sounds of her region, she gravitated toward the music of rappers such as 2pac and Lauryn Hill, two artists whose popularity in the Dominican Republic didn’t come close to their top-tier status in America.

“It’s an island, so we have island music,” she said. “Reggae, merengue, salsa and bachata; nothing like Hip Hop culture. It’s something that I personally felt attracted to.”

The local rap scene was equally limited in scope when she made her entrance in 2005; Melymel says she was the first women to start rapping in the Dominican Republic, and that it was a struggle to gain the level of respect she wanted. Resources were scarce and support was limited, but eventually she managed to entrench herself in the movement, and grow along with it.

Now with her new Dragon Queen album on the way, Melymel is looking to hone in on the trap sound that’s been a big part of her success so far. Born in 1988 — the year of the dragon on the Chinese calendar — the Dominican rapper wanted to make an album that embraces the scorching energy of her zodiac animal as well as herself, spitting fire over the production style that’s inescapable in today’s landscape.

“I’ve always liked the trap sound, even when nobody believed in it,” she said. “So now it’s like, ‘Let me give you a little bit of the wave,’ the eternal wave that’s been on my music forever, you know. ‘Stop Frontin’’ was one of the first professional tracks I ever recorded, and it’s trap.”

Melymel noted how the definition of trap music has expanded since she initially started working with the sound. As its presence and popularity has skyrocketed, she’s seen new branches grow from the cardinal tree, and take off with lives of their own.

“Trap is no longer traphouse music, trap is now commercialized,” she said. “Now it’s not only about selling drugs and popping molly; it’s about love, it’s about poetry. Everything evolves in life, and when something has a high demand, there’s going to be different varieties of the same product, because people are going to start commercializing and exploiting to their own needs.”

The rapper sees this shift as a positive, and mentioned how the natural progression has paved the way for the recent upswing in Latin trap as well. Melymel speaks several languages but typically raps in Spanish or English, and says her multilingual catalog has been instrumental to her success, even helping her lock in her deal with EMPIRE in 2017.

“The Latinos that live out here, they like it, and they would like to hear the sound in their own language,” she said. “This is when the transition started, so it’s going to keep happening. There’s now Korean trap, you’ve got to hear the trap music from Korea. It’s sick, and you don’t understand shit.”

Outside of the music, Melymel has been heavily involved in the Dominican film scene as well. Before she wanted to be a musician she was studying to become a director, but when she was hired to contribute to the soundtrack of Feo de Día, Lindo de Noche, the director noticed her outgoing personality and asked her to appear in the actual film.

A few years later she was named Best Actress at the 2014 La Silla Awards for her lead role in Locas y Atrapadas, although she downplays the amount of acting she did in the movie.

“I won Best Actress; I would say Best Confidence in Front of a Camera,” she said with a laugh. “It wasn’t really acting, it was just being me. But you can’t tell a thief to be a thief on camera, he’s going to feel funny. I think actually being yourself on camera is harder than acting, because it’s like, ‘What would you do, what would Jesus do.’”

Now that she has several movie credits to her name, however, she’s eager to adopt a different on-screen persona to give herself a new challenge. Her past few movies pushed her to modify her headstrong character and give a more nuanced performance, putting her in situations where she would lose control as a weakened figure. A few of her dream roles: a woman struggling with inner mental frustrations, someone who’s fearful of the world around her, or a character that “eats their boogers or something. Just something different, man.”

She says that duality will pop up on Dragon Queen as well, which is currently slated for release later this year. Melymel wants to highlight the fact that even those with the toughest exteriors can at times be sensitive, and simultaneously increase the relatability between herself and her devoted fans.